The Me Too movement was silent in Senegal. These women are trying to change that 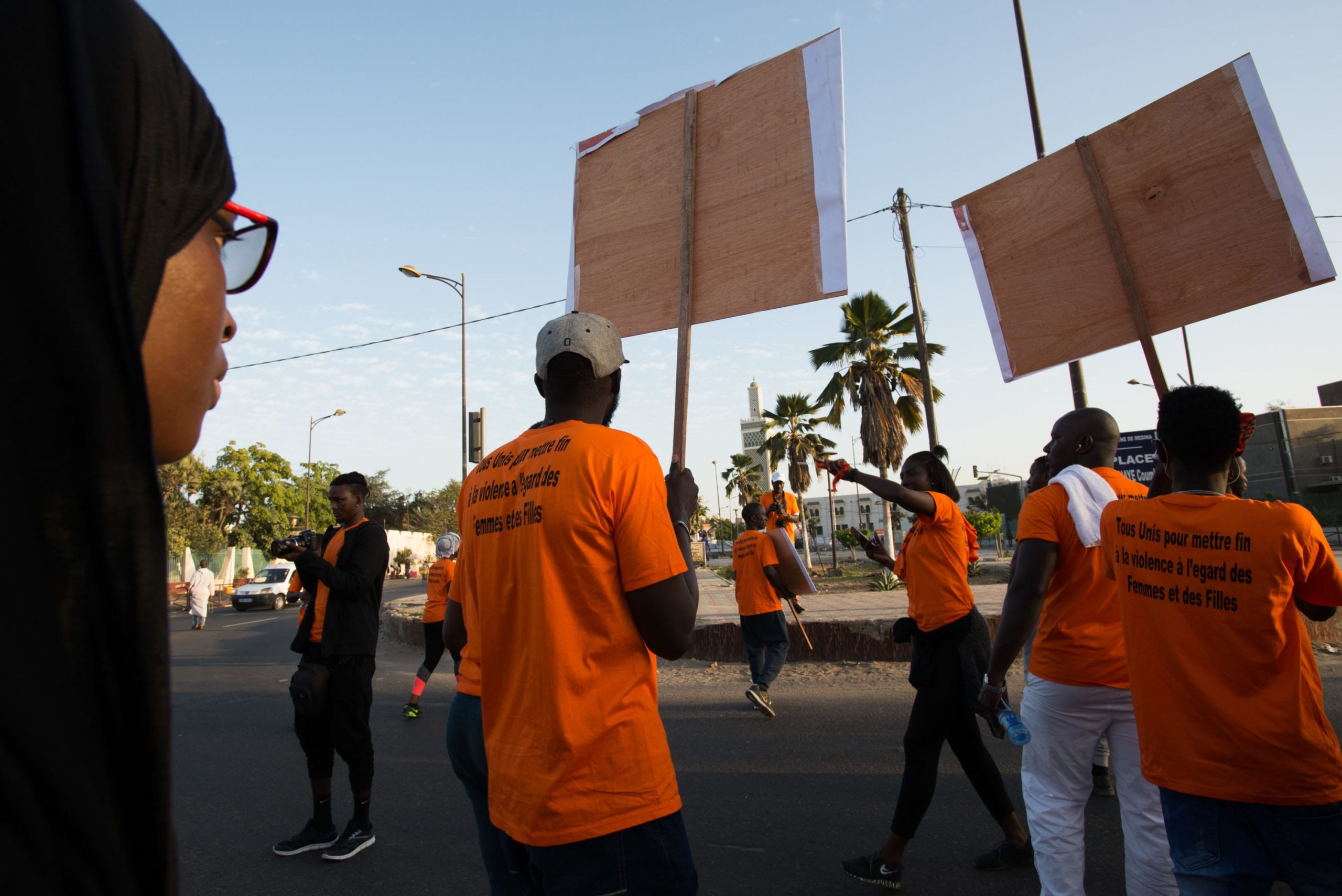 Late last year, as #MeToo spread from social media feeds in the United States, intensifying into a slew of global hashtags — #BalanceTonPorc, #YoTambien, and #QuellaVoltaChe among them — two women in the Senegalese capital of Dakar decided to start a movement of their own: #Nopiwouma.

Translated from Wolof into English, it means, “I will not shut up.”

But it’s been difficult getting women to speak out.

“Nopiwouma was never going to work like Me Too, because in Senegalese culture it’s hard for us to even get people to talk about it,” Senegalese blogger Ndambaw Kama (NK) Thiat, who co-founded the movement with tech entrepreneur Olivia Codou, told CNN.

In the West African country, where the majority of the population is Muslim and traditional gender roles persist, speaking out about abuse is discouraged. Wolof words like “masla” (to tolerate), “soutoura” (discretion), and “muñ” (to exercise patience, to endure) — often used when a woman is assaulted or harassed — reinforce this culture of suppression.

Since Thiat and Codou launched #Nopiwouma on Twitter in November 2017 and created a Google form for women to file anonymous reports, they’ve received more than 100 unverified accounts of harassment and abuse, many from women who had never before spoken about their experiences — privately or publicly. Thiat and Codou say they’ve been sent even more via direct messages on social media platforms, texts, emails, and are often approached in person. Many who have gotten in touch are strangers, others are close friends.

“For 90% of people that write in, it’s the first time they’ve talked about it. Many may have told their parents when they were young, but were asked not to speak out because it was going to impact their family’s reputation,” Thiat, 31, said over brunch at a tea and cake shop in Dakar’s bustling business district.

Shortly after starting her blog, World of NK, where she writes about Senegalese culture and society, Thiat started receiving personal messages and comments from women sharing stories of rape, abuse and harassment.

Unable to keep up with the volume, she opened a contributions section on her site where she could post accounts sent to her anonymously. When Thiat partnered with Codou on #Nopiwouma the concept was the same — creating a forum for women to speak out — but the intent was never to get women to name their alleged abusers.

“Culturally, I wasn’t expecting people to come out with names, like Harvey Weinstein, because they would be too scared,” Thiat said.

Since the initial public accusations of sexual abuse were lodged against Weinstein in October 2017, which he denies, an avalanche of similar allegations against powerful men around the world have followed. But while the American former film producer was arrested and charged, he has yet to be convicted of anything. Thiat says that if it’s difficult to get justice in the United States, she finds it hard to imagine it happening in Senegal.

“For people to actually come out and say this is the guy who did it … I think it’s too premature for that to happen in Senegal right now,” Thiat added.

According to a 2017 demographic and health survey carried out by Senegal’s National Statistics Agency, 8% of Senegalese women reported having suffered acts of sexual violence at some point in their lives, but women’s rights activists suspect that this number is significantly underreported.

Culturally, I wasn’t expecting people to come out with names, like Harvey Weinstein, because they would be too scared

In the same survey, one in four women aged 15 to 49 have, at some point in time, experienced acts of domestic violence — emotional, physical or sexual — at the hands of a husband or partner.

Sexual exploitation of teenage girls in Senegal’s secondary schools is widespread, according to a recent Human Rights Watch (HRW) report. Girls interviewed by HRW said their teachers lured them to have sex in exchange for better grades, food, mobile phones, and new clothes. The report’s findings were rejected by Senegal’s Ministry of Education.

Women in Senegal, as in most African countries, can’t say they are victims of rape because they’re stigmatized, according to Alpha Ba, UN Women communication specialist, West and Central Africa.

“There is a kind of don’t-ask-don’t-tell around the issue,” Ba said, adding that legislation to prosecute cases of rape and domestic violence is not yet concrete, and progress to change that is slow.

Senegalese law prohibits rape, which is punishable by up to 10 years imprisonment, but the law does not address marital rape and rights observers say it is rarely enforced. CNN has reached out to the Ministry of Justice for comment.

Last year, while women around the world were engaging in the #MeToo movement, Codou decided to do the same, going live on Instagram to talk about her own experience of sexual assault for the first time.

“There was the whole worldwide movement of ‘Me Too’ and I felt like it was time for me to talk, but there’s been a lot of backlash,” Codou, now 30, told CNN.

From the air-conditioned office where she works in a business incubator space alongside other young Senegalese entrepreneurs, Codou says that when she started #Nopiwouma people warned her not to associate with the taboo topic, saying that it could hurt her startup — a burgeoning tourism platform.

“There’s a lot of backlash if you talk about certain things here, but I think it’s necessary to have that courage,” Codou said.

She’s resolute about speaking out in the hopes that it will allow other women to do the same.

“Because of the culture of submission here, we as women don’t come forward as far as saying names, like, ‘he did this, he did that to me,'” Codou said. “Nopiwouma was about putting the emphasis on the survivors and giving them the platform to be able to find solutions to overcome any trauma that they had.”

Representing more than half of the country’s population, Senegal’s youth could play a decisive role in changing the way gender-based violence is discussed.

On a hazy Sunday afternoon in December, a group of about 100 young people gathered in Dakar’s Obelisk Square for a march to end violence against women in Senegal.

The obelisk, which commemorates Senegal’s 1960 independence from France, cast a long shadow over the square as organizers from local non-governmental organizations and grassroots groups passed out orange T-shirts to participants.

Among them was Fatima Zahra Ba, a 25-year-old Senegalese fashion designer who recently started a hashtag of her own: #Doyna, which means “that’s enough” in Wolof. Ba started the campaign as part of the UN’s 16 days of activism to end violence against women. She says her aim was to tackle “masla” and “soutoura” in Senegalese society by getting people talking about assault.

While women are posting on social media with the hashtag, few are coming forward with their own experiences of abuse, the designer says.

“Women can’t break the silence if they don’t feel at ease doing so, and that’s the problem here in Senegal, you feel like everybody knows what’s happening … but people are just like, ‘Oh, it’s fine. It happens to everybody.’ There’s no condemnation.”

“People don’t realize how bad the whole situation is, because of that culture of silence that prevails here,” she added.
The young artist is working alongside other activists attempting to shift that mindset — both online and in person — but their efforts are still scattered and the goals difficult to pin down.

“What I realized through this campaign is that the internet cannot do it all. It’s an amazing tool, but you cannot reach everybody,” Ba said.

Rokhaya Ngom, a UN Youth Volunteer serving as an advocate with UNICEF, has been working with both Fatima Zahra Ba and Codou to try to translate their online initiatives into action, organizing peer-to-peer groups for women aged 12- to 18-years-old to speak about harassment and assault. She says that while the anonymity of the internet makes discussing the topic much easier, it’s critical to break down those barriers in real life.

Still, thousands of women in Senegal have found refuge in the anonymity of the internet, seeking solace in closed groups where they can speak their mind.

Oumy Ndour, a former journalist with Radiodiffusion Télévision Sénégalaise, Senegal’s public broadcasting company, co-founded the private Facebook group Ladies Club Senegal in 2016 to serve as a safe space for women to speak openly about everything from sexuality, to problems with their husbands, harassment in the workplace, and fashion advice.

She confesses that much of her time is spent making sure men don’t infiltrate the club.

“To end taboos about sexuality in a country like Senegal it’s going to take maybe more than one generation,” Ndour says. “Things are starting to change because of social media and the internet. People have platforms that can help them express themselves about these issues in an anonymous way, but the path is very long to end taboo in Senegal.”
The country must first work on tackling stigma before adopting a movement like #MeToo, Ndour added.

And the reality is that groups like Ndour’s, and social media movements at large, reach only a sliver of the population — as of 2016, only a quarter of Senegal was on the internet.

Soukeyna Ndao Diallo, a lawyer and member of the Senegalese Association of Women Jurists (AJS), a legal aid group that runs drop-in centres for women in Dakar, says that while concepts like #Nopiwouma and #Doyna can be positive, they’re only accessible to an elite portion of society.

It’s something that Codou and Thiat are acutely aware of, and they’re working with groups like AJS and other NGOs on ways to extend their mission from the confines of the internet to cities and villages across the country.

“We have to be aware of the realities and not try to push a western concept,” Codou says.
“We have to try to find our own solution, based on our own values and how our society works.”