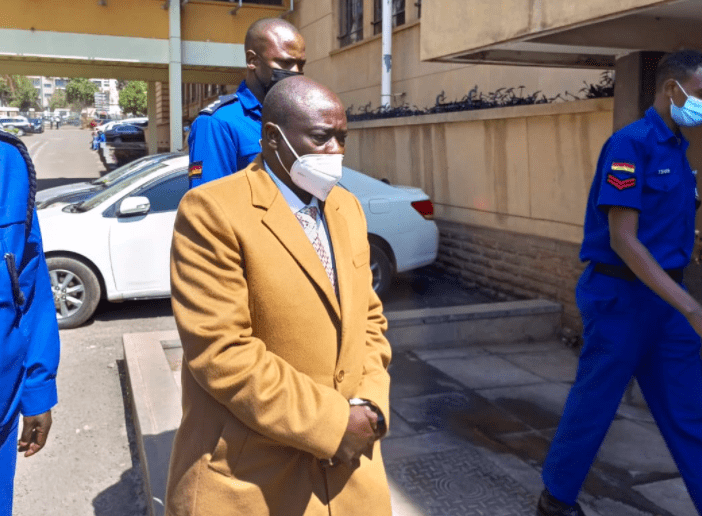 After spending the weekend in police cells, Mathira Member of Parliament Rigathi Gachagua was Monday morning arraigned at the Milimani Law Courts to face corruption charges for allegedly unlawfully receiving over Ksh.7 billion.

Gachagua, who was arrested last Friday, was arraigned before Chief Magistrate Lawrence Mugambi and charged with conspiracy to commit an offence of corruption, fraudulent acquisition of public property, money laundering, acquisition of proceeds of crime and conflict of interest.

He is charged alongside nine others who were not before the court. They include William Wahome Mwangi, Anne Nduta Ruo, Julianne Jahenda Makaa, Samuel Murimi, Grace Wambui Kariuki, Lawrence Kimaru, Irene Wambui Ndigiriri, David Reuben and a company M/s Rapid Medical Supplies.

He denied the charges and was released on a cash bail of Ksh.12 million with an alternative of Ksh.25 million bond. The court further directed that the MP surrenders his passport and should not contact witnesses.

The other accused persons were summoned to appear before the court on August 3, with the pre-trial scheduled for August 9.

The charge sheet indicated that on diverse dates between 2013 and 2020 in Nairobi, Rigathi Gachagua allegedly fraudulently received Ksh.7,330,011,265 through three bank accounts domiciled at Rafiki Micro-Finance bank while knowing that the monies were proceeds of crime.

He was charged that on December 29, 2014 in Nairobi, jointly with others not before the court, he fraudulently acquired Ksh.6 million public funds for supply of Dialysis machines to Nyeri Provincial General Hospital.

The MP was charged with money laundering for allegedly receiving a total of Ksh.104,821,205 from Bungoma County Government between January 2018 and June 2019, with intent to unlawfully dispose monies.

He is also alleged to have received Ksh.7,583,505 from the Kwale County Government with intent to unlawfully dispose the money.

The MP was also charged with conflict of interest on grounds that between October 2018 and January 2019 being the Member of Parliament for Mathira Constituency he privately benefited from a contract awarded for construction of Njathaini Primary School which was funded by the Mathira Constituency Development Fund. The contract, according to the chargesheet, was awarded to a company owned by one of Gacagua’s close associates.

The MP denied the charges, with the court set to rule on his bail terms.