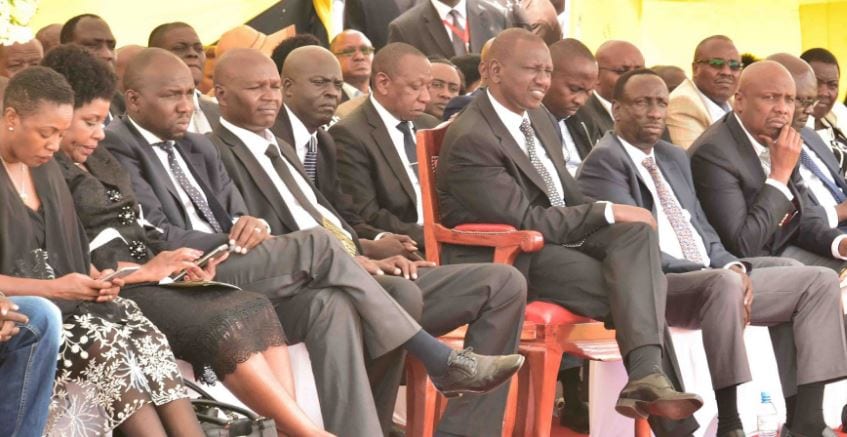 Lawmakers from different regions have stated that they will support William Ruto to run for President in 2022.

The MPs also said the claim that President Uhuru Kenyatta “is too young to retire in 2022” is baseless.

Kikuyu MP Kimani Ichungwa noted that the President respects his deputy, the Constitution and Kenyans in general.

“Mr Ruto will be Jubilee’s presidential candidate in 2022,” he said on Saturday.

“Do not to listen to the propaganda that was started by the Central Organisation of Trade Union (COTU) Secretary General Francis Atwoli,” Mr Ichungwa added.

According to him, the Deputy President is going through ‘challenges’ in preparation for his elevation to the top political seat.

“Nothing will stop God’s plan; this is hustlers’ time,” Mr Kuria said.

“We have worked with you, and we have seen that you can move this country to the next level,” she said.

Other leaders called on Baringo Senator Gideon Moi to support his “brother” for the presidency.

“Let the Deputy President go ahead and clear the path for us,” Kuresoi North MP Moses Cheboi said.

“Mzee Moi was our President for 24 years. He is not anyone’s property to be held hostage. As leaders, we need his wisdom on leadership,” the KANU legislator said.

His statement was in response to an incident on Thursday where Mr. Ruto failed to meet the former President in Kabarak despite being kept waiting for several hours.

The mood in the country is for development-oriented politics and the latest wave of handshakes set pace for a united nation, Bomet County Governor Joyce Laboso added.

They were speaking during the burial of the late Grace Jelagat Kipchoim who was the Member of Parliament for Baringo South. She died on April 20 after a long battle with colon cancer.