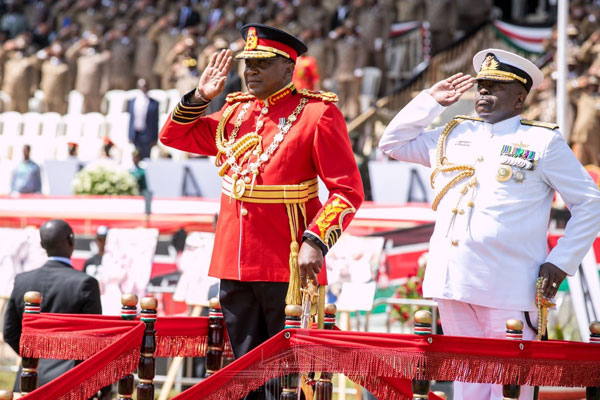 The Kenyan government could deploy the military to the contested Kenya-Somalia maritime border if a motion tabled in the National Assembly on Wednesday is approved.

The motion co-sponsored by Majority Leader Aden Duale and his Minority counterpart John Mbadi is seeking to have Kenya use all means necessary, including the military, to protect the maritime boundary in the Indian Ocean, which Somalia wants to encroach.

“…this House resolves that the Government of the Republic of Kenya explores other lawful and constitutional mechanisms for protecting the territory of the Republic, including deploying the Kenya Defence Forces to the subject boundary to undertake the responsibility of protecting the sovereignty and territorial integrity of the Republic as contemplated under Article 241(3) of the Constitution,” reads part of the motion signed by the two House leaders.

However, before engaging the military, Duale and Mbadi want the boundary dispute to be resolved through diplomacy and dispute resolution mechanisms available under various international treaties including the AU, IGAD and EAC.

“As a first and most preferred option, engage the Federal Government of Somalia to resolve the boundary dispute for the benefit of both countries and the region, through diplomacy and dispute resolution mechanisms available
under African Union (AU), Intergovernmental Authority for Development (IGAD) and East African Community (EAC),” reads the motion.

As an alternative, the two also want the Kenyan government to explore the option of directly engaging the Federal government of Somalia to solve the maritime boundary row, which has seen Somalia file a case at the International Court of Justice (ICJ).

The hearing of the dispute between the two countries will start on September 9 and run through to September 13 at the ICJ in The Hague, Netherlands.

Somalia sued Kenya at the ICJ, seeking to redraw the maritime boundary from the current eastwards flow from the land border south of Kiunga, to a diagonal flow.

If the court agrees with Somalia, Kenya could lose up to 100,000km2 of sea thought to contain huge amounts of hydrocarbons.