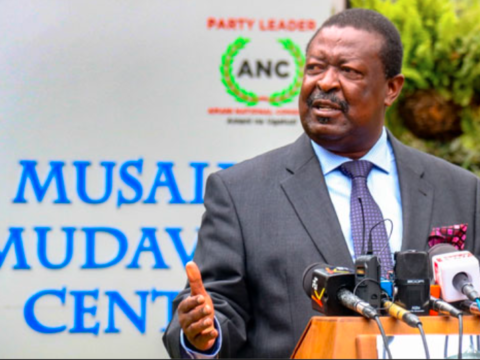 Amani National Congress (ANC) leader Musalia Mudavadi has denied reports that the party is courting Kirinyaga Governor Anne Waiguru to be his running mate in the 2022 presidential election.

Speaking on Citizen TV’s New Night show, Mudavadi disowned sentiments made by ANC deputy party leader Ayub Savula who announced that the party was courting Waiguru to team up with ANC.

Mudavadi says Savula made the remarks “in his peak of excitement” adding that those were personal sentiments and do not represent the position of the party.

During the Tuesday interview the show host Waihiga Mwaura asked Mudavadi: “Are you courting Governor Waiguru as your potential running mate?”

In response the ANC leader said: “No… We are not courting any specific person for runningmate. We are looking at it openly. That was Savula… In his peak of excitement he made his comments. I asked him and he said they were personal sentiments. Even though he made some reference to ANC no such commitment has beeen made.”

When Governor Waiguru visited the EACC headquarters on September 9, the conspicuous presence of Lugari lawmaker Ayub Savula and other ANC members at Integrity Centre raised attention.

“We are courting Anne Waiguru as ANC. We don’t want her intimidated by anyone, we know its because of politics and that it is very difficult to sell a certain party and a certain individual who is standing as a candidate…,” said Savula.

Even though the governor has announced her intention of defending her seat, there has been pressure from some of her supporters for her to go for the deputy president’s seat.

Waiguru, however, maintains she is still weighing different options and will inform Kenyans about her decision when such a time comes.

Meanwhile, Mudavadi, who has since declared his bid to vie for President in 2022, says he will be looking for someone with integrity and who is trustworthy when searching for a runningmate.

Waihiga: Are you ‘courting’ Governor Waiguru as your potential running mate?

Musalia Mudavadi: No…We are not courting anyone for the running mate position… We are open… Statements by my deputy party leader were made on personal basis#NewsNight @WaihigaMwaura pic.twitter.com/XrxT0We0gg