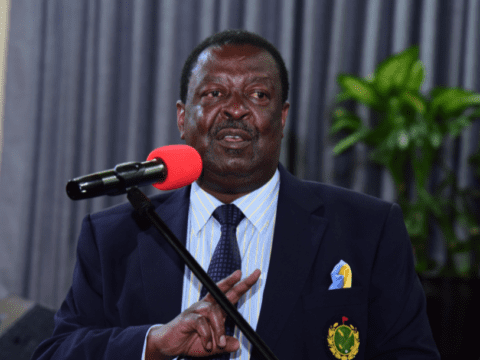 Mudavadi termed the claims as pure propaganda by rivals keen to split the One Kenya Alliance, saying only voters will decide who will be the country’s 5th president

It is a rumble in the mountain and Mudavadi is stepping up his effort to a have a slice of the vote rich Central Kenya region.

For nearly the 7th time in 3 months, Mudavadi pitched tent in Central Kenya on Saturday when he attended a fundraiser at St. Cecilia Catholic Church in Nyandarua County.

The ANC party leader said it is only Kenyans who will determine their next president and not boardroom political deals.

Mudavadi warned Kenyans to be mindful of the leaders they elect, saying leaders’ temperament was critical for those who assume office as it will determine the country’s stability and unity.

Mudavadi has visited Nyeri County twice, Murang’a County, Nakuru County and last week he was in Githunguri, Kiambu County, as he faces Mt. Kenya for the critical presidential vote.