Mukhisa Kituyi: I did not quit prestigious international job to be anybody’s project 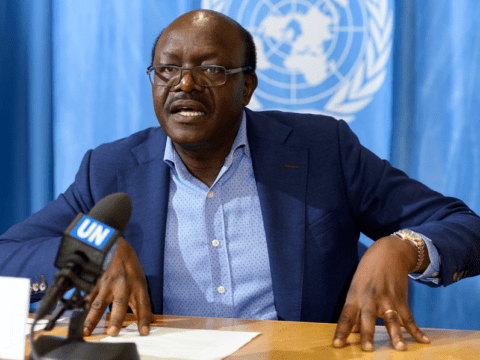 Technocrat-turned-politician Mukhisa Kituyi has come out to dismiss reports that his 2022 presidential ambitions are not backed by his own desire but by powerful shadowy figures.

Kituyi, who spoke on Citizen TV’s News Night show on Tuesday, rubbished the claims saying he could not possibly have resigned from his cushy job as UNCTAD Secretary General only to come and be someone else’s “project.”

According to Kituyi, his presidential run is driven purely by his desire to see change in the way the country’s affairs are run.

“I want to be a project of the Kenyans who aspire to return values of inclusion, empathy, targeting the most vulnerable among us, resuscitating hope among the youth.”

Are you anyone’s project?

Dr. Mukhisa Kituyi: No……… I would have not resigned my job to become someone’s project
#NewsNight@WaihigaMwaura pic.twitter.com/kBfgGalJR5

Kituyi said he has, in the recent past, taken a seat from active political rallies due to the Ministry of Health guidelines occasioned by the COVID-19 pandemic.

He however maintained that he has kept his political engagements going, adding that he will soon make a formal declaration on where he stands, inlcuding which party he will seek the country’s top seat on.

“After my homecoming, there was a declaration of a lockdown, that was the start of the pandemic, and encouragement for leaders to avoid having super spreader events like rallies. I have responded to that, not just as obeying the government and advisory from the ministry of health, but as a responsible citizen,” he stated.

“So my initial plan of having larger rallies had to give way. In the meantime, I have fashioned more focused focal group meetings; I’ve had meetings between 20-30 people in all constituencies of Kwale, for example, Mombasa, Kilifi, Bungoma, Kakamega, Trans Nzoia etc.”

Kituyi further said he is presently also seeking out alliances ahead of the 2022 race, but saying he will not work with “any person who has a clear recent history that they’re cerebrally corrupt.”

Dr. Mukhisa Kituyi: I decided to adhere to the MoH regulations by cancelling rallies. I’m going to announce if I will be running for the president seat when the time comes ….#NewsNight@WaihigaMwaura pic.twitter.com/m0uhOyg3ul