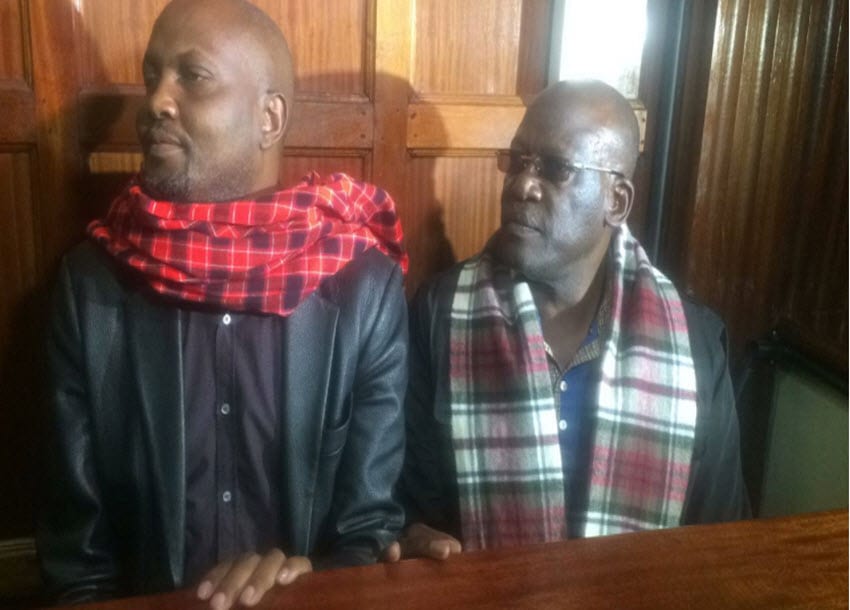 Former Machakos senator Johnstone Muthama and Gatundu South MP Moses Kuria have been released on a cash bail of 300,000 shillings each after they were separately charged and pleaded not guilty to incitement to violence charges.

Nairobi chief magistrate Francis Andayi further directed the two accused persons to sign a 1 Million shillings each as a personal commitment that they will maintain the law and not commit similar offences.

According to the charge sheet presented to court, Muthama is alleged that on 10th of this month at Isinya town within Kajiado County, he uttered words which indicated that it might have been desirable to engage on a physical fight which was calculated to bring death or physical injury to persons.

The former senator was represented by a team of 13 lawyers led by senator James Orengo, John Khaminwa , Harun Ndumbi among others.

The lawyers also said that they will appeal the ruling requiring Muthama to enter into a recognizance saying its presuming that he is guilty.

Separately Kuria was charged that on the 5th of this month at Wanginge Market Kikuyu sub County within Kiambu County used abusive words to wit.

The prosecution claims that the words were abusive and intended to bring physical injury to a person.

Kuria was represented by lawyer Cliff Ombeta and Francis Munyororo.

Lawyers representing Muthama and Kuria indicated to the court that they will be challenging the particulars in the charge sheet.

Lawyer John Khaminwa said that the charge against Muthama is ridiculous.

Further the defence complained to the court saying that the charges brought before the court are different with the charges entered in the occurrence book in Pangani Police station.

Earlier in the day the Prosecution was given two hours to decide whether they will press charges against Former Machakos senator Johnstone Muthama.

This is after state counsel Aloys Kemo said that they need time to review Muthama’s file before charging him.

However lawyers representing the former Lawmaker opposed to the application saying that Muthama’s rights have been infringed by police and the prosecution and want the court to released Muthama on bond pending investigations and prosecution.

Justice Luka Kimaru allowed the prosecution to review the file and come up with a concrete plan on the next step on whether they will charge Muthama or not.

The cases will be heard separately on the 23rd of January 2018.