Muthama skips Wiper meet amid speculations of a fallout with Kalonzo 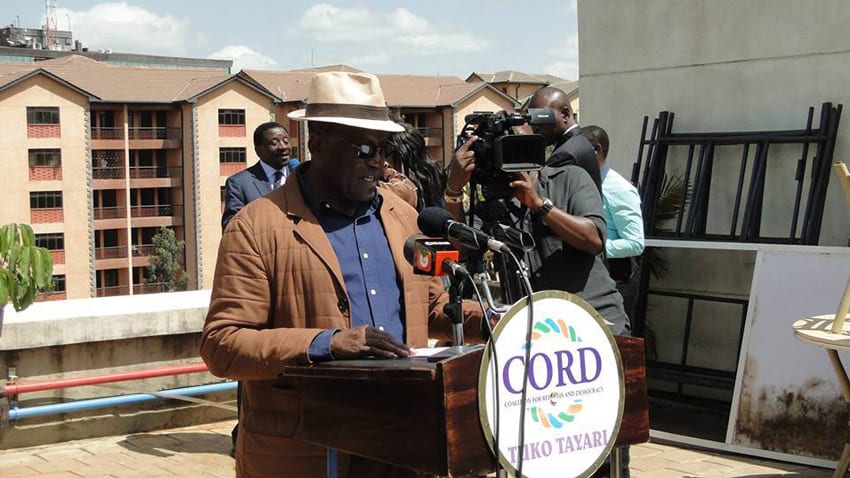 Addressing the press during a joint CORD Management Committee briefing, Muthama said that the Wiper meeting was less important compared to the CORD presser hence his decision to skip it.

“The Wiper meeting was a small house keeping session that was not as important as the CORD press briefing on matters of Independent Electoral and Boundaries Commission (IEBC),” said Muthama.

His absence in the Wiper meeting, where his alleged misconduct was to be discussed, evidences a brewing storm within the Wiper Party.

There has been reports of a widening fissure between Kalonzo and Muthama, his close ally, in the recent past with the former accusing the Machakos Senator of wooing the Kamba community to support Raila Odinga for presidency.

In a strongly-worded speech on Saturday, Kalonzo warned Muthama against undermining his decent to presidency saying he would not allow the future of Kenya to be messed by the Senator’s “selfish acts”.

“We would all want to be in one party, but that is not possible. Let us not take advantage of my trip to create divisions in Wiper. Muthama can disagree with me on this, he is allowed to,” said Kalonzo.

“I carry the final word because I hold the vision of the party and if Muthama continues to undermine my effort to become CORD’s presidential candidate, the people of Ukambani will rip off his trouser, like was the case in Parliament (in reference to December 2014 during the Occupy Parliament protest against the Security Bill).”

During the meet-the-people tour in Sultan Hamud, Kalonzo accused Muthama of working with Siaya Senator James Orengo to o undermine his efforts to be CORD’s presidential candidate and tilting the campaign in favour of ODM’s Raila Odinga.

“I am fully aware of what you have been doing behind my back with Orengo to pre-determine the outcome of CORD presidential primaries and deny me the ticket.”

“You (Muthama) must convince Wiper supporters that the ticket you are pushing (Raila) can deliver victory for CORD,” added the seemingly furious Kalonzo.

Muthama has in the past said that CORD has already settled on its presidential candidate who will face President Uhuru Kenyatta in the 2017 General Election, remarks that he reiterated in Tuesday’s presser.

His irrepressible stand on CORD’s presidential candidacy has sparked internal discontent within Wiper party, which has insisted on fronting its leader Kalonzo Musyoka for as the coalition flag bearer.

But the senator seems unfazed by the imminent backlash from his party members insisting that everybody in CORD knows who the presidential candidate would be, in what has been perceived as an oblique endorsement of Raila.

“CORD already has a presidential candidate who is well known and anything else is a non-issue,” said the defiant senator.

In a move to downplay the gravity of the matter, however, Wiper Secretary General, Hassan Omar, said there was no rift between Kalonzo and Muthama.

The Mombasa Senator, however, insisted that “the people” had settled on Kalonzo as their CORD presidential candidate saying Wiper delegates would meet on December 10, 2016 to endorse him.

Omar further said that the Tuesday meeting was normal party routine to discuss party affairs and take stock of progresses made overtime, and not aimed at discussing Muthama’s supposed shift in allegiance.

On the issue of defection, the Wiper SG said that they had settled on November 24, 2016 as the date that party defectors should appear before it as they seek to “clean” their house in preparation for the 2017 elections.

The Mombasa Senator also took the opportunity to hit out at Jubilee over its apparent failure to tame corruption.

Omar said that all those named by former Devolution Cabinet Secretary, Anne Waiguru, in connection with the NYS scandal should be summoned while calling on Health Cabinet Secretary, Cleopa Mailu, to step aside to give room for proper investigations into the alleged Afya House scandal.