‘My baby saved me’: How Mlolongo woman, daughter escaped death 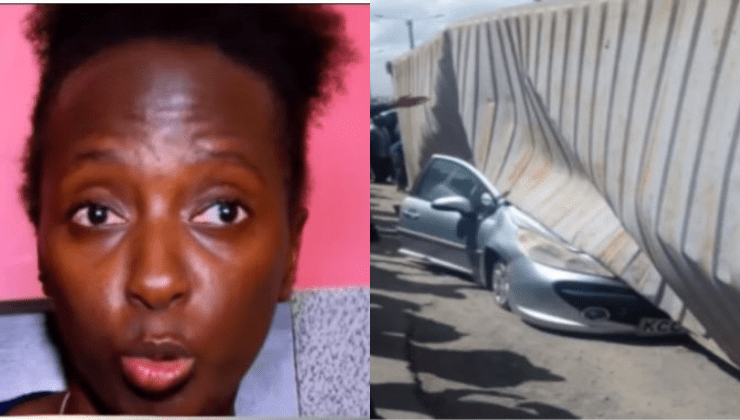 “Were it not for my daughter, we would be dead today.”

These are the words of Rima Gichoga, the woman who survived a road crash on Saturday with her 2-year-old daughter in Syokimau on the Nairobi-Mombasa highway.

A truck crashed her car moments after they got out.

It all started like a bad Saturday morning, with a sick daughter who refused to eat. The mother in her would not let Ms. Gichoga rest, so they got into their car to look for something that her daughter would eat to gain her strength.

She had parked her car on a service lane off the highway, at the Syokimau junction, with her baby already in distress.

“She usually cries a lot, and when that happens she starts throwing up so I parked the car to check up on her. And then I saw the container as it started to tip over, I didn’t even think about it, I just grabbed the child and fell out onto the side of the car,” she narrates.

“On looking, I saw the container on top of the car, and my legs were still inside.”

A taxi driver who knew the woman picked her up and rushed her to a nearby hospital where she was attended to.

“I was in shock and was given medicine to calm me while she was given painkillers. I think I lay on top of her when we fell out of the vehicle onto the tarmac,” she adds.

Ms. Gichoga also has an older child – a son — whom she left behind on that fateful morning.

“We left him behind because when I leave with him he usually says I’m wasting his play time. If we had all gone then we would have died because I wouldn’t have known whom to save,” she says.

Because of this, she gives thanks to God adding that she believes she has a bigger purpose on earth.

“I don’t know why God spared me, but I know there’s a reason. I can’t let someone else go through what I went through,” she adds.

On Monday, she visited the scene of the accident and the Athi River Police Station where the wreckage of her car and the truck that almost took their lives are parked.

She asked herself several questions during that trip down memory lane, but chose to live to tell the story of her miraculous escape.

“My baby saved me by giving me the strength to move because I wanted her to live. I keep on saying heaven is missing an angel and they sent her to me,” she stated.