‘My name has been tarnished but heart still strong,’ says Obado 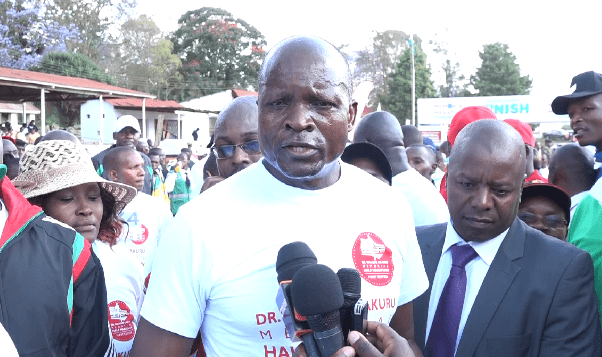 Migori Governor Okoth Obado on Sunday joined Deputy President William Ruto and other leaders for a marathon in honour of the late Nyeri Governor Dr. Wahome Gakuru who perished in a road accident in November last year.

Speaking at the event held in Nyeri Town, Governor Obado once again asked for spiritual support noting that he is going through a time of tribulation after he was charged with the murder of Rongo University student Sharon Otieno.

“I am very happy to be with you here today and as you can see, spiritually I am alright. Let me just ask that you continue praying for me because of this other problem I am facing.

“My name has been greatly tarnished but my spirit remains intact, actually its even more stronger,” said Obado.

At the same time, Obado remembered the late Governor Wahome Gakuru as a great leader and close friend who was lecturer at the university.

“We have a lot in common with the people of Nyeri. The governor whose life we are celebrating today was a lecturer of mine at one time and we became so close. I can even say that probably I am one of the people who inspired him to contest for governorship,” said Obado.

“My coming here today is to show solidarity with you and help the deputy president cement that unity which we all cherish as Kenyans.”

On Saturday, Governor Obado, who appears to be in a new-found alliance with Ruto, said he will put his weight and that of his close his allies behind deputy president’s campaigns and projects. He was speaking in Migori where he received Ruto for the second time in one week.

On his part, DP Ruto commemorated the late Nyeri Governor saying that he was “an outstanding Kenyan.”

“Dr. Gakuru was an outstanding Kenyan and he did make a huge contribution to this country. Even before he came to Nyeri he drove our vision 2020 which is the transformation vehicle of this country,” said Ruto.

The DP promised that the government would ensure the Ruringu Stadium in Nyeri is completed within the next one year.

Nyeri Governor Mutahi Kahiga thanked the the national government for supporting the half marathon and all participants of the event.

“I thank the people of Nyeri for turning up in large numbers to remember the third governor of Nyeri Dr. Wahome Gakuru. We are here commemorating him by remaining faithful to the dreams and vision he set for us,” he said.

The Dr Wahome Gakuru Memorial Half Marathon was categorised into three races of 21, 10 and 5 kilometres.