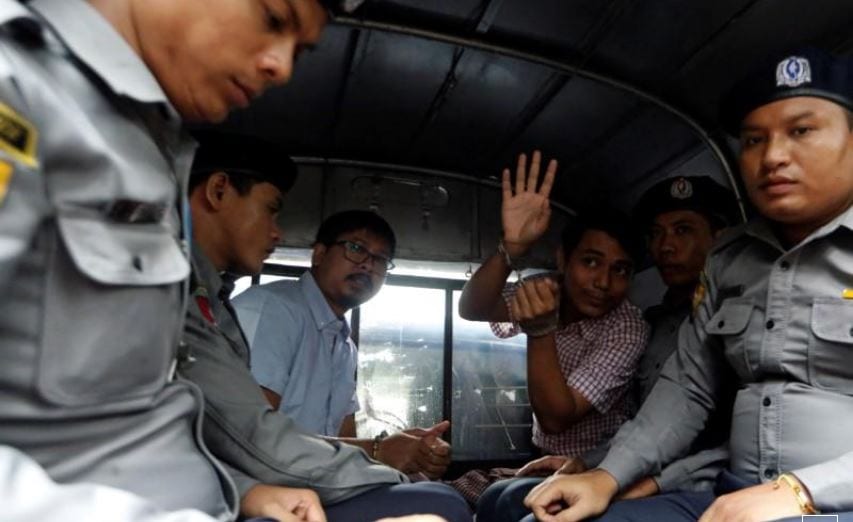 Yangon district judge Ye Lwin charged reporters Wa Lone, 32, and Kyaw Soe Oo, 28, with breaching of the colonial-era Official Secret Act which carries a maximum penalty of 14 years in prison. The journalists pleaded “not guilty” to the charges.

The case has attracted global attention. Some Western diplomats and rights groups say it is a test of progress towards full democracy under the administration of Nobel laureate Aung San Suu Kyi in a country where the military still wields considerable influence.

In his ruling on Monday, the judge said the court had filed charges against both reporters under section 3.1 (c) of the act to probe the prosecution’s allegations that they collected and obtained secret documents pertaining to the security forces with the intention to harm national security.

Proceedings will now enter the trial phase, during which defense lawyers will summon witnesses before the judge, who will then deliver a verdict, according to legal experts.

Earlier this month, defense lawyers asked the judge to throw out the case, arguing the prosecution had failed to provide sufficient evidence to support the charges. They said the journalists were arrested in a sting operation by the police that was aimed at interfering with their reporting.

At the same July 2 hearing, prosecutor Kyaw Min Aung urged the judge to charge the reporters. He said documents they had in their hands when they were arrested detailed the movements of security forces, while further documents found on their mobile phones ranged from confidential to top secret.

Myanmar government spokesman Zaw Htay has declined to comment throughout the proceedings, saying Myanmar courts are independent and the case would be conducted according to the law. He did not immediately answer calls seeking comment after the court ruling on Monday.

At the time of their arrest in December, the reporters had been working on an investigation into the killing of 10 Rohingya Muslim men and boys in a village in western Myanmar’s Rakhine State. The killings took place during a military crackdown that United Nations agencies say led to more than 700,000 Rohingya fleeing to neighboring Bangladesh.

The reporters have told relatives they were arrested almost immediately after being handed some rolled up papers at a restaurant in northern Yangon by two policemen they had not met before.

In April, Police Captain Moe Yan Naing testified that a senior officer had ordered his subordinates to plant secret documents on Wa Lone to “trap” the reporter.

After his court appearance, Moe Yan Naing was sentenced to a year in jail for violating police discipline by having spoken to Wa Lone, and his family was evicted from police housing. Police have said the eviction and his sentencing were not related to his testimony.

Writers, press freedom and human rights activists around the world have rallied on behalf of the imprisoned reporters, with the United Nations and several Western countries calling for their release.