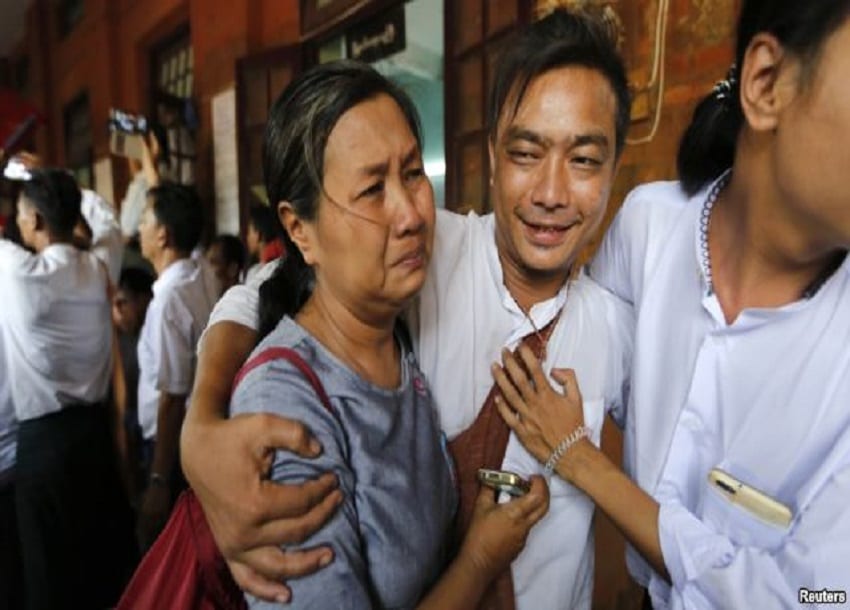 Myanmar has released more than 100 political detainees under an amnesty that was the first official act by Aung San Suu Kyi, a former political prisoner herself and now the most significant figure in the new civilian government.

The state-run Global New Light of Myanmar newspaper said Saturday that 113 political detainees were released across the country. Human-rights groups estimate that Myanmar has had about 500 “prisoners of conscience” in detention.

Families and friends of the detainees began gathering at prisons after Aung San Suu Kyi announced Thursday that prisoners would be released in conjunction with Buddhist new year celebrations in the coming days.

Supporters greeted prisoners who were freed Friday with flowers, cheers and hugs.

In the midst of the celebrations, however, a court in the central city of Mandalay convicted two peace activists of association with the Kachin Independence Army, an outlawed guerrilla group in far northern Myanmar.

The two Buddhists – 28-year-old Zaw Zaw Latt and 34-year-old Pyint Phyu Latt, members of an interfaith organization – say they were on a charity mission.

They are already serving time for violations of immigration law for crossing the Myanmar border with India on a 2013 visit to the city of Laiza, which is under control of the guerilla group. They had been arrested after posting pictures of their visit on social media, and were convicted in February.

The nonprofit Assistance Association for Political Prisoners (Burma) says Myanmar has some 500 political prisoners, either convicted or awaiting trial.

Nobel Peace laureate Aung San Suu Kyi announced the prisoner release in her role as state counselor to the government, a new position established this week that essentially makes her Myanmar’s top leader. A constitutional change instituted by the former military government, evidently written with Aung San Suu Kyi in mind, bars anyone with a foreign-born spouse or children from serving as president.

Included in the new government sworn in last week are many democratic activists who spent years in jail under the previous regime. Aung San Suu Kyi herself was placed under house arrest in 1989, and spent 15 of the next 21 years in custody.

Her National League of Democracy party came to power following a landslide election victory in November that produced Myanmar’s first civilian-led government in more than five decades. NLD representatives hold a clear majority in parliament, but the military still retains 25 percent of all seats.

The democracy leader, who has said that her role will be “above the president,” also serves as foreign minister and minister of the president’s office. Her childhood friend Htin Kyaw was elected head of state by parliament.