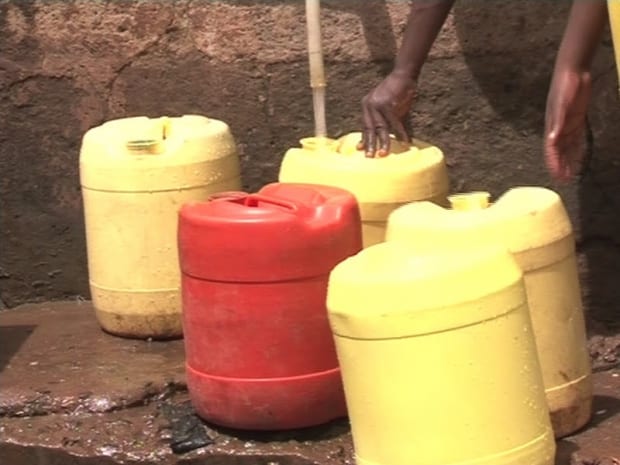 When the prolonged drought saw water supply to Damaris Kiarie’s Nairobi home rationed, she decided to buy water from a local vendor.

It was, she soon learned, a mistake.

After storing two 20-litre drums of water in her kitchen, her son came home from school and poured himself a cup, she remembers.

But “when I arrived home from work, I found him complaining of stomach pains. Within one hour he had diarrhea.”

She took the 7-year-old to a nearby hospital where medical staff diagnosed cholera, and successfully treated him for it.

After that, Kiarie bought a large tank that can store 1,000 liters of piped water for emergency use.

Kiarie said contaminated water causes at least two cases of cholera every month in her neighborhood.

Added to that are the water cartels that tap illegally into the water mains, siphoning off water that they then sell to residents. That water can easily become contaminated.

“When there is a water shortage it is our children who suffer the most. It is good for our leaders to look for alternative sources of water,” said Kiarie.

Nairobi’s main water source is the Ndakaini Dam which supplies about 85 percent of the 500 million liters of water the city uses each day, according to the city’s water company.

Nahashon Muguna, who heads the Nairobi City Water and Sewerage Company, however said demand is much higher: around 700 million liters.

Also Read: We will end the city water scarcity- Igathe

Not surprisingly, residents such as Kiarie wonder what can be done to close the gap.

To that end, the capital is diversifying its sources of water, Nairobi governor Mike Mbuvi Sonko told the Thomson Reuters Foundation.

“This can help remove cartels who have taken over water businesses in the city,” he said.

Ensuring residents have access to enough water would remove demand for the cartels’ supply, he said.

One solution is to rehabilitate a series of nearby wetlands, dams and swamps both inside and outside the city, and pump the water to the capital.

That is something the government is working on together with donors and the private sector.

Many freshwater wetlands have become polluted or have been encroached on over the years.

Previous efforts to improve water systems for Nairobi have included a $35million (Ksh.3.5billion) rehabilitation of rivers in the Nairobi area.

In addition, the improvement of the Nairobi Dam is also part of a regeneration project in Kibera slum.

Although some of the water being brought in is not fit as drinking water, it could be used for sewerage, construction and irrigation, said Nixon Korir, a member of parliament for Lang’ata.

“This can help reduce the amount of fresh water used for enterprises, and increase the volumes families can use for cooking and drinking,” Korir said.

“On the other hand, reclaimed wetlands can be used to boost local tourism through recreation.”

Along the Nairobi River, waste has been removed, trees planted and toilets and sewers installed in slums along its course, Korir said.

The river’s water is now used by small businesses such as car washes, as well as to keep the city’s public toilets clean.

However, rehabilitating areas such as the Ondiri wetland and is Kenya’s deepest freshwater swamp – could help supply more drinking water to the city’s ever-growing population, Korir said.

Naftali Mungai, an environmentalist who has worked for years with the Ondiri community, said the wetland serves as an underground source for Kikuyu springs, the oldest freshwater drinking source in Nairobi.

But encroachment, pollution and deforestation have pushed the Ondiri wetland, which sits outside Kikuyu town, to the brink, he said.

Experts such as David Ngugi, the chairman of the Ondiri, Nyongara, Kavuthi and Rongiri (ONKARU) water resources users association, a non-profit, reckons it would require as much as $100 million to conserve it properly.

The threat to Ondiri, however, has united leaders inside and outside Nairobi, with communities working to restore the wetland.

“Everybody is planting trees to save Ondiri swamp. We are chasing away people who extract vegetation and water from the wetland,” Ngugi told the Thomson Reuters Foundation.

Esther Kaguima, environment officer for Kiambu county, where the Ondiri wetlands is located, said her office was assessing whether to build a reservoir from which Nairobi could draw water to make up shortages.

“Supplying fresh water from the swamp to Nairobi and its neighborhoods is our main focus once it is restored and protected from encroachment,” she said.