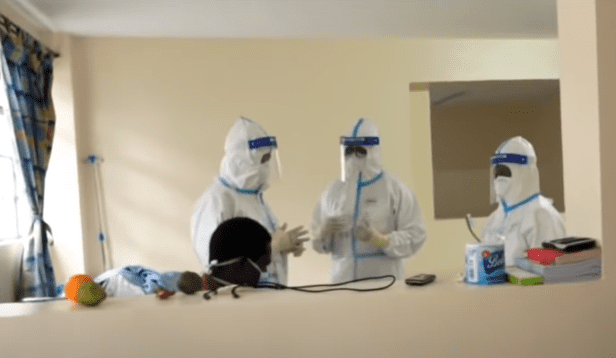 A clinic in Nairobi’s Toi market is on the spot after it emerged that five of its healthcare workers handled the Covid – 19 patient who died in Bomet County.

The fear is that the five might have failed to take sufficient protective measures since the patient failed to declare his battles with symptoms of an acute respiratory illness.

A total of 24 contacts including the 5 clinicians and nurses at Vostrum clinic have now been quarantined.

The 55-year-old patient, Ernest Kosgei, was buried on Thursday night at his home in Kawaget village, Bomet with his death leaving the government with the task of tracing and quarantining everyone he came in contact with.

Laboratory results indicated that his death was caused by Covid – 19.

The government has been retracing his last steps casting a sharp focus on the informal settlement of Kibra.

Even though he lived alone in a single-roomed house in Soweto West, Kosgei came into contact with quite a number of Kibra residents.

As of Thursday, five more people had been isolated raising the number of contacts picked to 24. His house and the area around has been disinfected.

The deceased footsteps have been traced to Vostrum clinic located in Toi Market in Nairobi.

On May 4, Kosgei is reported to have traveled from Nairobi to his rural village of Kagawet using a police vehicle secured by a relative, an officer in the service.

The government is yet to make it clear on the station the vehicle was borrowed from and the number of people who traveled in it that day.

What we know is that a total of 36 contacts were made by Kosgei before he breathed last.

Upon reaching his destination, the deceased was booked at Longisa Referral Hospital for treatment of diabetes but died the following day.

Before his heart stopped breathing, Kosgei had made contact with 14 people among them 9 health workers at Longisa Hospital.

With his results turning out positive for Covid-19, the doctors and nurses who treated him have been put in quarantine.

The deceased did not disclose the coronavirus-like symptoms and it’s believed that the health workers might not have adequate protection measures.