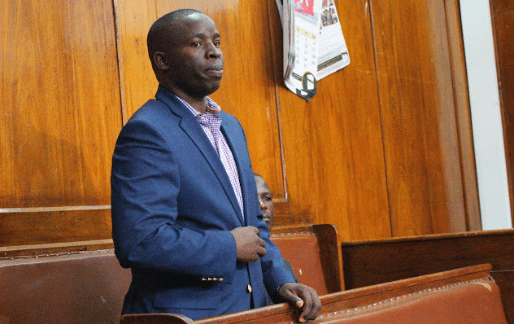 Nandi Governor Stephen Sang was on Tuesday presented in court and charged over destruction of the Kibwari tea estate in Nandi hills.

He is accused of authorising county earth movers to destroy tea bushes at the Kibwari tea estate valued at Ksh.2 million.The county boss denied the charges and was released on a Ksh.1 million bond or Ksh.500,000 cash bail.

At the same time, a Member of County Assembly in Nandi County and county driver were also presented in a Nandi court and charged over destruction of the Kibwari tea estate in Nandi Hills.

Kapchorwa MCA John Kebenei, who is also the County Assembly Chief Whip, was arraigned alongside a county driver who was charged for operating an earth mover that was used in destroying tea bushes valued at Ksh.2 million.

The two had accompanied Nandi Governor Stephen Sang in the invasion of the tea estate, which the county boss says is established on grabbed public land.

They denied the charges and were released on a Ksh.1 million bond or cash bail of Ksh.500,000.

Sang was apprehended on Monday after presenting himself to the Director of Criminal Investigations (DCI) offices in Nandi County following reports that he was being sought by police for destroying the Kibwari tea estate, which he claims is set up on grabbed public land.

Following 45 minutes of interrogation at the DCI offices, sang was whisked away to the Kisumu Central Police Station for further questioning.

Sang claims the four-acre piece of land in question was grabbed from the community by multinationals and influential politicians in 2003.

On Friday, the governor literally took matters into his hands, armed with a power saw, he cut down tea bushes at the Kibware Tea Plantation.

Sang said that he was acting on complaints from members of the public who decried that the four acres of land reserved for the establishment of public utilities had been grabbed.