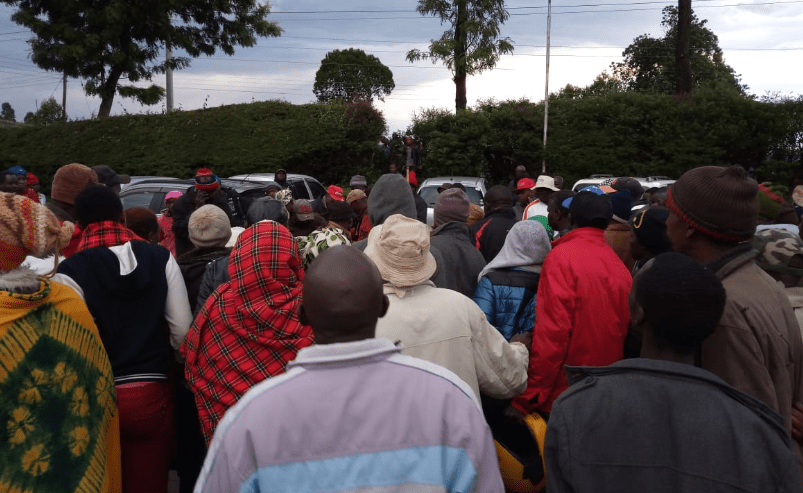 The government has declared a dusk to dawn curfew at Olposimoru village in Narok County, amid the escalation of tribal clashes.

The clashes on Tuesday left a trail of destruction and many injured victims, as rival community members walked around with crude weapons.

Reports indicate that the fight was triggered by a cattle rustling incident even as claims emerged that the renewed fighting is being fueled by politicians seeking to influence the Mau evictions.

“Between 6pm and 6 am we don’t want to see anybody move to or from any direction. We will also not allow anyone to carry any kind of weapon. From there we will do general assessment of the situation before the next step, ” said Rift Valley regional coordinator Mwongo Chimwanga.

Two people sustained injuries in Tuesday’s encounter and it took the intervention of police officers to bring a temporary sense of calm.

The officers lobbed teargas to disperse members of the Kipsigis and Maasai communities that were advancing against each other.

A section of leaders from the area are, however, urging the government to take serious action against the perpetrators of the violence.

MP Gideon Keter asked Director of Public Prosecutions Noordin Haji and Inspector General of Police Joseph Boinnet to bring to book all leaders who issued inciting remarks that resulted to the ongoing clashes.

In a statement on Tuesday, Mr. Keter said the ongoing skirmishes between the warring communities living in some parts of Narok North Constituency which include Olposimoru, Tegat, and Olengape has not gotten deserving government attention.

“We need joint statement from the Ministry of Environment and security to tell us whether the title deeds possessed by individuals being evicted both in the clashes and Mau Forest Eviction are valid or not.

“Failure by the government to take prompt actions and punish those who harass and intimidate other communities in the county, we will rally protests across the Rift to end such impunity,” he said.

On Sunday, at least 21 people were injured following renewed clashes between the Maasai and the Kipsigis at Olpusimoru area in Olenguruoni, Narok County.

Narok County Commissioner George Natembeya, however, said the fighting started after members of one community allegedly stole cattle from the other.