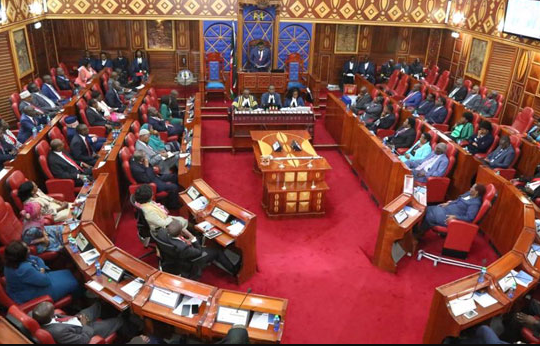 Governors who have served two terms will not be allowed to vie for any seat at the county level if a bill proposed by Trans Nzoia Senator Dr Micheal Mbito is passed.

The bill read in the senate for the first time last week wants all second term Governors barred from going for constituency or Senate seats.

“The President retires after serving his two terms, why are Governors allowed to vie for other positions after serving for two terms? The constitution is silent on that and we must correct it.” Said Mbito.

He says most of the Governors are now targeting development projects in constituencies they will be vying in 2022, and therefore taking an undue advantage.

“Who would compete with a Governor that has billions at his disposal and is only developing one constituency that he will vie” poses Mbito.

He says such Governors should only go for Presidency or any other position at the National Level but not at the county level.

The bill is likely to meet stiff opposition from second term Governors who have been angling for constituency positions.

The second term Governors have been pushing for regional governments to remain relevant with some openly stating they will be vying for MPs seat of go for Senatorial seats.

If passed in the Senate, the bill will be taken to the National Assembly for debate before being taken to the President for ascent.