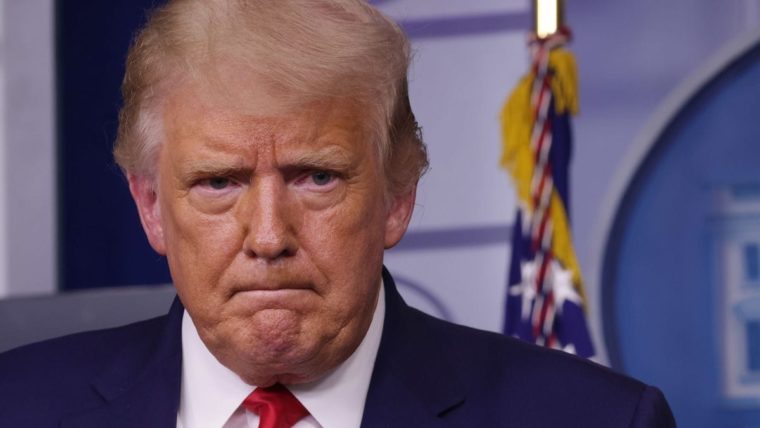 New emails from Justice Department and White House officials show how President Donald Trump’s allies pressured then-acting Attorney General Jeffrey Rosen to consider false and outlandish allegations that the 2020 election had been stolen at the same time that Rosen was being elevated to lead the Justice Department in December 2020.

The emails show how Trump’s White House assistant, chief of staff and other allies pressured the Justice Department to investigate claims of voter fraud in the 2020 election — and how Trump directed allies to push Rosen to join the legal effort to challenge the election result, according to a batch of emails released by Democrats on the House Oversight Committee on Tuesday.

The documents also offer a window into how Rosen dealt with the political pressure coming from the White House.

Trump’s campaign to pressure the Justice Department was occurring as he was replacing Attorney General William Barr — who had publicly said there wasn’t evidence of widespread voter fraud — with Rosen, the emails show.

On December 14 at 4:57 p.m., Trump’s assistant sent Rosen and DOJ official Richard Donoghue a document claiming to show voter fraud in Antrim County, Michigan. An aide to Donoghue forwarded the document to the US Attorneys for the Eastern and Western Districts in Michigan. Less than an hour later, Trump tweeted that Barr would be leaving the Justice Department just before Christmas, elevating both Rosen and Donoghue to the top spots at DOJ.

The emails also provide new detail into how Mark Meadows, then-White House chief of staff, directed Rosen to have then-Assistant Attorney General Jeffrey Clark — who reportedly urged Trump to make him acting attorney general instead of Rosen — investigate voter fraud issues in Georgia before the US attorney there resigned in January.

Amid the pressure, Rosen said he refused to speak to Trump’s personal lawyer Rudy Giuliani about his false claims that the 2020 election was stolen.

When Meadows sought to have Rosen arrange an FBI meeting with a Giuliani ally pushing a conspiracy theory that Italy was using military technology and satellites to somehow change votes to Joe Biden, Rosen said he would not help Giuliani.

“I flatly refused, said I would not be giving any special treatment to Giuliani or any of his ‘witnesses,’ and re-affirmed yet again that I will not talk to Giuliani about any of this,” Rosen wrote to Donoghue.

The new emails provide additional detail to reports earlier this month from CNN, The New York Times and others on Meadows’ emails to Rosen after the election, which revealed how the top White House aide had urged the Justice Department to take action for Trump’s benefit. The emails included a list of complaints about voting procedures in New Mexico, alleged “anomalies” in a Georgia county and the claims about Italian satellites.

House Oversight Chairwoman Carolyn Maloney, a New York Democrat, sent letters Tuesday to Meadows, Donoghue, Clark and other DOJ officials seeking their testimony before the committee. The committee last month requested an interview with Rosen. In a statement, Maloney said the emails show that “President Trump tried to corrupt our nation’s chief law enforcement agency in a brazen attempt to overturn an election that he lost.”

The emails also show how Trump directed allies toward Rosen, who had been named acting attorney general following Barr’s December 2020 resignation after Barr had publicly said there had not been widespread fraud in the election.

Kurt Olsen, a private attorney, reached out to John Moran at the Justice Department on December 29 requesting a meeting with Rosen, promising he could meet at the Justice Department with an hour’s notice. He attached a draft complaint modeled after the Texas Supreme Court lawsuit unsuccessfully challenging the election results in four states, and wrote in a follow-up email that Trump directed him to meet with Rosen to discuss the US bringing a similar action.

“The President of the United States has seen this complaint, and he directed me last night to brief AG Rosen in person today to discuss bringing this action,” Olsen wrote. “I have been instructed to report back to the President this afternoon after the meeting.”

The same day, Trump’s White House assistant also forwarded the draft complaint to Rosen and Donoghue to review, saying it had also been shared with Meadows and White House counsel Pat Cipollone.

By the end of the year, it was clear Rosen and Donoghue had tired of the pressure campaign from the White House.

The emails show how Meadows pushed the Justice Department to investigate the fraud claims being made by Trump allies like Cleta Mitchell, the lawyer who assisted Trump on his January 2 call when he pressured Georgia officials to “find” him votes.

In an email on January 1, Meadows says there were “allegations of signature match anomalies” in Fulton County, Georgia, asking Rosen to have a Justice Department official “engage on this issue immediately to determine if there is any truth to this allegation.”

Rosen forwarded the email to Donoghue later that day, saying: “Can you believe this? I am not going to respond to the message below.”

“At least it’s better than the last one, but that doesn’t say much,” Donoghue responded.

When Meadows sent Rosen a YouTube video link about Italian satellites, Rosen forwarded it to Donoghue, who responded, “Pure insanity.”

The new emails released by the committee include correspondence with Clark, a Justice Department lawyer who tried to convince Trump to remove Rosen and use the DOJ to undo Georgia’s election results, which The New York Times reported in January. In the January 1 email, Meadows asked Rosen to have Clark look into the alleged signature issues in Georgia, ahead of a meeting on January 3 in which Trump heard directly from Clark and Rosen before ultimately choosing not to remove Rosen.

In what appears to be the aftermath of a January 3 meeting of Trump, Clark, Rosen and others, then-Justice Department official Patrick Hovakimian wrote, “It sounds like Rosen and the cause of justice won.”

“Amazing,” responded John Demers, the head of the National Security Division, who is leaving the Justice Department at the end of the month.