New US envoy Kyle McCarter takes over from Godec 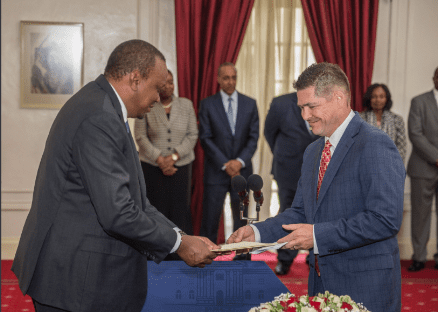 The newly appointed U.S. ambassador to Kenya Kyle McCarter has officially taken over from his predecessor Robert F. Godec.

McCarter was among six other envoys who presented their credentials to President Uhuru Kenyatta on Tuesday.

“I am honoured that President Trump has asked me to serve as the United States Ambassador to Kenya. My wife and I are overjoyed to come home to a country where we served in Tharaka Nithi 30 years ago. We have two sons and one was born in Kenya. My time as an entrepreneur in manufacturing and in the Illinois Senate has prepared me for this important assignment,” McCarter said.

He takes over from Amb. Robert Godec who has served as US envoy to Kenya since 2013.

Pundits claim that Godec’s tenure faced challenges when President Kenyatta focused on building a relationship with the Chinese Government which may have overlooked gains made after the U.S. supported the Uhuru-Raila truce.

Godec was largely seen as part of the force that brokered the famous handshake deal that pacified rivals of a disputed election in 2017.

However in 2018, the inaugural direct flight from Kenya to the U.S. and American businessmen flocking to the country afterwards, seemingly rekindled the ‘old flame’.

“Kenya needs a national movement and sustained war on corruption. Corruption is a cancer that is killing Kenya and it must end,” he said in August last year.