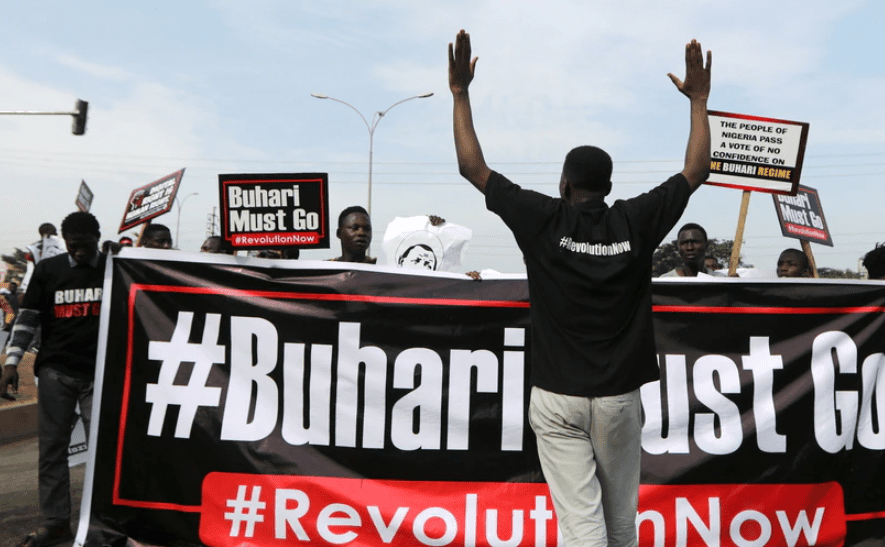 The Democracy Day demonstrations came as President Muhammadu Buhari has been struggling to control terrorism, criminal abductions and separatist movements. Last week, Buhari suspended Twitter after it deleted a controversial tweet of his. Protesters blasted the act as a dictatorial punishment against free expression.

The protesters were holding placards marked #Buharimustgo and demanding an end to insecurity and what they called systemic oppression.

Some protests in Abuja were dispersed by security agents who fired tear gas canisters and gunshots into the air, according to eyewitnesses.

Their banners and placards were also seized by state security operatives, said Cletus Uba, who was at Gudu junction, one of the protest venues.

“I was here when all these protesters were around, and I know what they’re agitating for, the insecurities in the country,” Uba said. “When they were here protesting, police, soldiers, civil defense started shooting tear gas and guns into the air.”

There was a heavy presence of armed security men and women all over the Abuja metropolitan region on Saturday, and the same was seen in many states across the country.

But 15 kilometers from Gudu — the spot in Abuja where protesters were dispersed — hundreds of government supporters gathered in a counteraction.

The inscription on their green-and-white vests read, “I stand with Buhari.”

The president on Saturday morning addressed the nation through the government broadcaster and said he was fixing insecurity issues.

“Let me assure my fellow citizens that every incident, however minor, gives me great worry and concern, and I immediately order security agencies to swiftly but safely rescue victims and bring perpetrators to justice,” he said.

Buhari, a former military general, was elected in 2015 on a vow to root out security threats and grow the economy.

But his administration has been plagued by reckless attacks carried out by insurgents and bandits, as well as a booming kidnapping-for-ransom market. His cabinet has been severely criticized for not addressing those issues sooner.

Rising insecurity was not the only reason protesters were marching in the streets. They said last week’s Twitter ban was an attempt to gag free speech.

Ariyo Dare of the Nigeria Center for Liberty, one of the protesting groups, said, “The banning of the Twitter platform in Nigeria is undemocratic, irresponsible, thoughtless and very insensitive. Nigeria should be a leading light in terms of democracy in Africa.”

Nigerian authorities, who say social media has been used to promote comments that threaten the existence of the state, are now in talks with Chinese officials to create an internet firewall, according to Nigeria’s Foundation for Investigative Journalism.

But as the country marked Democracy Day, many protesters and critics said Buhari was Nigeria’s biggest threat to democracy.