‘No mercury in sugar seized in Eastleigh,’ says KEBS 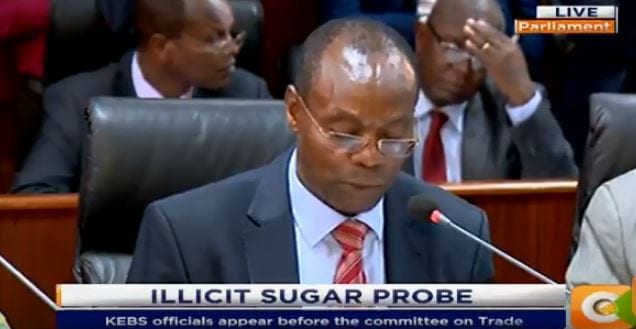 The samples obtained and tested from the first consignment of contraband sugar confiscated during a sting operation in Nairobi’s Eastleigh estate did not contain any mercury.

“The sugar was tested on June 11, 2018 against the Kenyan standards for brown and white sugar borrowed from the codex committee (international standard for testing.) The samples were at that moment not tested for mercury and as such the first batch given to the DCI did not contain any test results for mercury since mercury testing is not a requirement of the international standard,” said Ongwae.

“Subsequent tests for samples from other locations have also been completed. The tests were done against the same standards but further tests were done for heavy metal contaminants as a result of public outcry and no mercury was detected. No mercury has been detected in the samples that we have tested.”

Ongwae however revealed that some of the sugar was found not compliant to the standards used at the Bureau.

“Certain sugar samples were found non-compliant to the standards at the bureau. The sugar has since been recalled from the market,” said Ongwae.

Also in attendance was principal secretary of the Ministry of East African Community Betty Maina and her counterpart Trade PS Chris Kiptoo.

“We are part of the joint task force that comprises other agencies such as the Kenya Police and Kenya Revenue Authority, formed after the president’s order to combat counterfeit products. To date we have had 358 successful operations around the country,” Maina said.

“Counterfeit goods are an increasing menace in our country.”

Ongwae was keen to add that the Kenya Bureau of Standards has put measures in place to curb the rising menace of contraband products in the country.

“Working with the joint task force we have formed a border patrol committee to man all border points that may be used to smuggle contraband into the country, the public can also send short messages to the bureau to confirm initial inquiries to the authenticity of any product or download the KEBS scanner which can identify counterfeit goods,” Ongwae added.