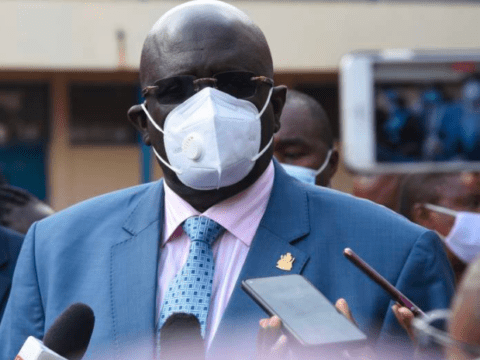 Education Cabinet Secretary Prof. George Magoha now says the country is recording good progress in the ongoing mop up of pupils to join secondary schools as part of the government’s 100% transition policy.

Prof. Magoha says Nyeri County is leading with 102% with Nyamira, Mandera and Bomet counties already recording 100%, Nyandarua, Kisii and Wajir counties are jointly between 95 and 99 percent.

The CS says Homabay, Kirinyaga, Migori and Kiambu are at 96% while Kisumu County is at 82% adding that they are keen on flushing out those in slum areas to take advantage of the government sponsorship.

Speaking at Nyalenda slums where he picked up three pupils who were later taken to Kisumu Boys and Girls schools, Magoha said the exercise will carry on once schools return from the half term.

“The reason why I chose to come here is because Kisumu County is at 82% and I knew this is because of the slums where we have very intelligent children,” said Magoha.

Magoha told off those criticizing the mop up exercise saying it has been very transformative and has now seen a 10.3 % increase in the number of candidates registered for the 2021 Kenya Certificate of Secondary Education (KCSE) exams.

“I want to urge the public to ignore all those people making noise without facts. We have just completed registration of candidates for KCSE 2021 which will be taken in March 2022 and the footprint of 100% transition is already there.

So all those busy bodies who are self-proclaimed experts people should ignore them. Our job is to ensure all those children who complete Class 8 join Form 1 and beyond that any child who has been out of class is mopped back to school,” said Magoha.