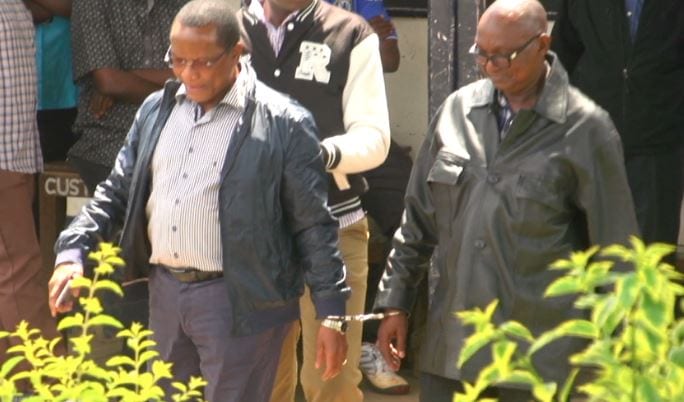 Twelve of the 27 suspects being sought after by police over the NYS Ksh.9 billion scandal surrendered to authorities on Thursday just before a court deadline elapsed.

The 12 are part of a group of 54 individuals, including Youth Affairs Principal Secretary Lillian Mbogo-Omollo and NYS Director General Richard Ndubai named by Director of Public Prosecutions Noordin Haji set to be charged over the Ksh.9 billion National Youth Service (NYS) scandal.

They include 40 public servants and 14 business operators.

The Directorate of Criminal Investigation boss George Kinoti confirmed the arrest of the 12 and warned the 15 still at large that their days are numbered.

“We have formed a special unit to track and arrest all the suspects named in the scandal and we are urge them to surrender because we will find and arrest them wherever they are,” said Kinoti.

PS Omollo and Ndubai were charged on Monday where they pleaded not guilty to several charges that included; conspiracy to commit an offense of corruption, willful failure to comply with applicable procedures on guidelines relating to the management of public funds and breach of trust by a person employed in the public service.

Chief Magistrate Douglas Ogoti ruled that the suspects remain in police custody as they await the court’s ruling on whether they will be released on bail or not on Tuesday, June 6.

Ogoti further ruled that those who failed to appear in court on Tuesday present themselves at the Directorate of Criminal Investigation (DCI) by Thursday 2PM.

Those still at large: