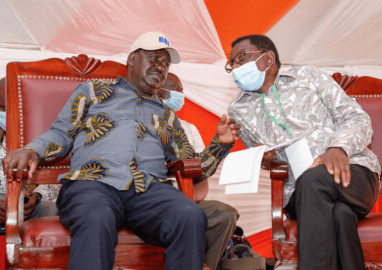 A section of ODM Members of Parliament have come out to defend their party leader Raila Odinga’s proposed social protection policy, saying that it is achievable.

ODM leader Raila Odinga through his Azimio la Umoja popularization campaign has been saying that if he is elected President in 2022, his administration with give every vulnerable household a monthly stipend of Ksh.6,000.

The proposal has been defended by Siaya Senator James Orengo together with MPs Samuel Atandi (Alego/Usonga) and James Opiyo Wandayi (Ugunja) who say that the social development policy is the one that will eradicate poverty in the grassroots.

Mr. Atandi who spoke in his constituency stated that since the Kenyan budget is more than Ksh.3 trillion, it will be very possible to increase the budget for the social protection services by at least Ksh.100 billion to enable the implementation of such policy.

"Every year we spend Ksh.38 billion for the old people. What Raila will do is increase that budget by Ksh.100 billion and we have estimated there are about 2 million households in this country. This policy is going to help our people fight poverty," said Atandi.

His sentiments were echoed by Senator Orengo who reiterated that nothing is impossible for the government since it has adequate funds that can enable it to transform the lives of its citizens.

On his part, while speaking separately in his constituency, Ugunja MP Opiyo Wandayi stated that by attempting to question Mr. Odinga’s policy on the support for the vulnerable families, Deputy President William Ruto and his brigade have started panicking.