'One sub-county, one product!' Raila promises to build more factories as he woos Kisumu 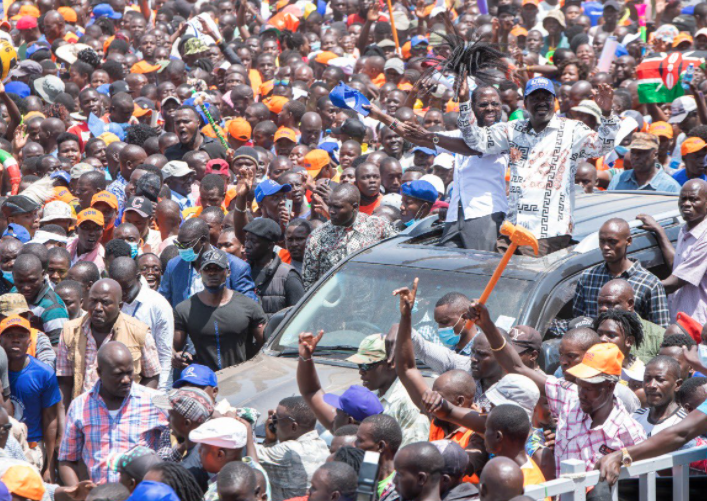 Odinga, who spoke during an Azimio la Umoja function in Kisumu on Friday, said the factories will be built in all sub-counties to provide job opportunities for the millions of unemployed youth across the country.

The former premier also stated that, through Baba Care, Kenyans will be able to access medical services even if they do not have cash at hand.

Odinga reiterated his social welfare protection proposal saying all poor households in the country will be entitled to a Ksh.6,000 stipend every month from his government.

“We will build factories…each sub-county will have its own factory…one sub-county, one product…that will bring a lot of jobs to our unemployed youth, as well as farmers. We will also bring Baba Care, so that everybody will have medical insurance…even you do not have money but you’re sick, you will be able to go to hospital and get treatment,” he said.

“My government will also look after single mothers who are suffering, either after losing their husbands and siring children with irresponsible men. We will also bring the social protection fund to poor families that have no income.

He added: “This is something that happens even in the U.S, Brazil, Egypt, Namibia etc. These families will receive Ksh.6,000 monthly from the government.”

Odinga also pledged to seal all corruption loopholes, further hitting out at his main rival Deputy President William Ruto for what he termed as mismanagement of public resources.

The Azimio la Umoja frontman accused the DP of allegedly looting taxpayers money and then taking it right back to them in the name of donations and harambees.

“Raila Amollo Odinga has been the Prime Minister of this country for 5 years, I know where the money is….I know where Ruto steals money from, and then carries them in sacks and takes to the people, lying to people in the name of carrying out harambees for the youth, women, schools, churches,” he said.

“Every month he contributes Ksh.100 million in harambees, yet his salary is only Ksh.2 million. The rest he steals.”