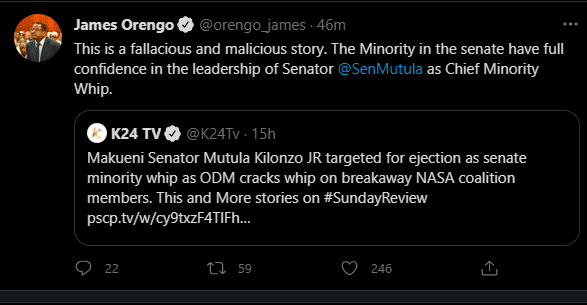 Senate Minority Leader James Orengo has dismissed a media report alleging that there is a plot to remove Makueni Senator Mutula Kilonzo Jnr as the Chief Minority Whip in the Senate.

Orengo termed the report as “fallacious and malicious”, adding that the Minority in the Senate has full confidence in the leadership of Kilonzo, who is allied to the Wiper party.

The media report claimed that ODM was planning to crack the whip following the move by its NASA coalition partners (Wiper, Ford-Kenya and ANC) to break away from the alliance.

“This is a fallacious and malicious story. The Minority in the senate have full confidence in the leadership of Senator Mutula Kilonzo Jnr as Chief Minority Whip,” Orengo said in a tweet.