Orengo now reveals why Raila was ‘sworn in’ alone 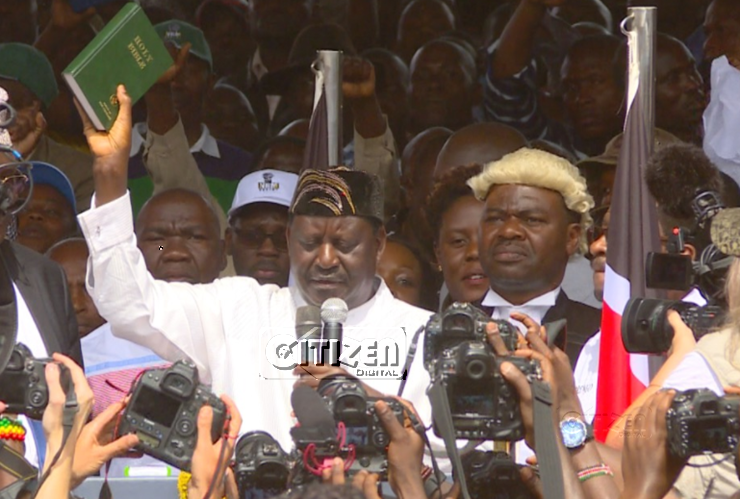 Siaya Senator James Orengo has revealed that the three NASA co-principals, who skipped the controversial swearing-in of Raila Odinga, bailed out at the 11th hour.

Appearing on Citizen TV’s Big Question show, Mr. Orengo spoke for the first time on the intrigues that led to Mr. Odinga taking the oath in the absence of his closest allies: Kalonzo Musyoka, Musalia Mudavadi and Moses Wetangula.

“Even as we were going to Uhuru Park, we still thought they would attend the event, since they gave an indication that they would come,” Orengo said.

“At the very last moment, when he realised they would not show up, Raila Odinga called them and said he would instead inform the audience that the three had sent their apologies, which he did.”

He said all the NASA leaders had agreed to meet at Serena Hotel and later make a grand entrance at Uhuru Park but this was not to be.

The Senator dismissed an earlier claim that Mr. Odinga had instructed the three co-principals to switch off their phones, saying they were all in constant communication until the last minute.

“This thing about a Nigerian number is false. I can even show you the call logs, I have not erased them,” Orengo told Citizen TV‘s Hussein Mohamed.

Mr. Barrack Muluka, ANC Party Secretary General, is on record saying that Mr. Odinga told the three co-principals to switch off their phones, only for him to show up at Uhuru Park alone.

“Raila (Odinga) knows that what I am saying is the truth. He told the gentlemen to switch off their phones and that he would reach them with a foreign number from Nigeria,” he said during an interview on Citizen TV’s JKL show.

The three co-principals have since given varying accounts on what caused them to skip the event. At one point Mr. Musyoka claimed that they were technically under house arrest but later retracted and said they had agreed to have Mr. Odinga sworn in without them.

Skipping the contentious swearing in of Mr Odinga as the people’s president seems to have had a negative effect on the political clout of the co-principals. Mr. Wetangula was on Tuesday ousted as the Senate Minority Leader while his two counterparts are now left trying to shake off the ‘betrayer’ tag.