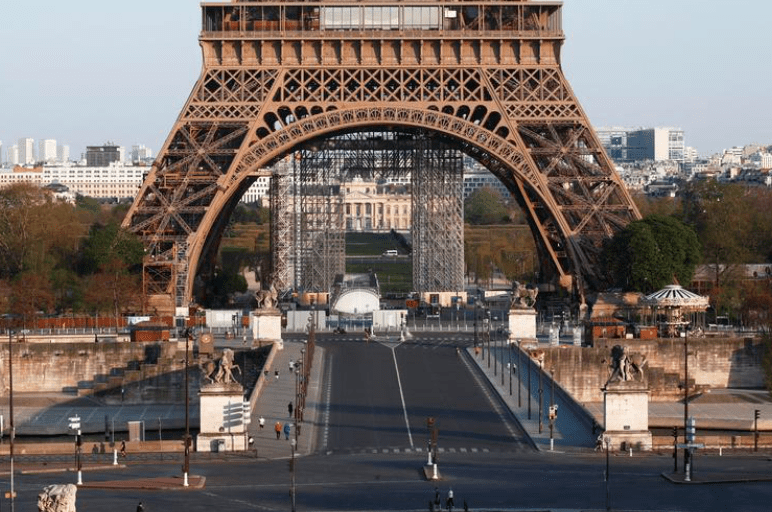 France imposed a month-long lockdown on Paris and parts of the north after a faltering vaccine rollout and spread of highly contagious coronavirus variants forced President Emmanuel Macron to shift course.

Since late January, when he defied the calls of scientists and some in his government to lock the country down, Macron has said he would do whatever it took to keep the euro zone’s second largest economy as open as possible.

However, this week he ran out of options just as France and other European countries briefly suspended use of the AstraZenca vaccine.

His prime minister, Jean Castex, said France was in the grip of a third wave, with the virulent variant first detected in Britain now accounting for some 75% of cases. Intensive care wards are under severe strain, notably in Paris where the incidence rate surpasses 400 infections in every 100,000 inhabitants.

“The epidemic is getting worse. Our responsibility now is to not let it escape our control,” Castex told a news conference.

France reported 35,000 new cases on Thursday and there were more COVID patients in intensive care in Paris than at the peak of the second wave.

Now was the time to tighten restrictions, Castex said.

“Four weeks, the time required for the measures to generate a sufficient impact. (It is) the time we need to reach a threshold in the vaccination of the most vulnerable.”

The lockdowns will kick in from Friday at midnight in France’ 16 hardest-hit departments that, with the exception of one on the Mediterranean, form a corridor from the northern Channel port city of Calais to the capital.

Barbers, clothing stores and furniture shops will have to close, though bookstores and others selling essential goods can stay open.

Schools will stay open and people will be allowed to exercise outdoors within a 10 km (6.2 miles) radius of their homes. Travel out of the worst-hit areas will not permitted without a compelling reason.

“Go outdoors, but not to party with friends,” the prime minister said.

Castex said France would resume inoculations with the AstraZeneca vaccine now that the European Medicines Agency had confirmed it was safe.

Seeking to shore up public confidence in the Anglo-Swedish vaccine, critical if France is to hit its targets, Castex said he would get the shot on Friday.

“I am confident public trust in the vaccine will be restored,” he said, though he acknowledged it might take time.

Although Macron stopped short of ordering a nationwide lockdown, the lockdowns may be extended to other regions if needed and may yet slow the country’s economic recovery.

The Paris region is home to nearly one fifth of the population and accounts for 30% of economic activity.

A nationwide nightly curfew in place since mid-December remains in place, though it will start an hour later, at 7 p.m.

The government had no regrets about not locking down earlier, Castex said.

“It was the right decision in January. We would have had an unbearable three-month lockdown. We did well not to do so.”

Not everyone agrees. In the intensive care unit of a private hospital on the edge of Paris, doctors expressed resignation at having once again to deal with overloaded wards.