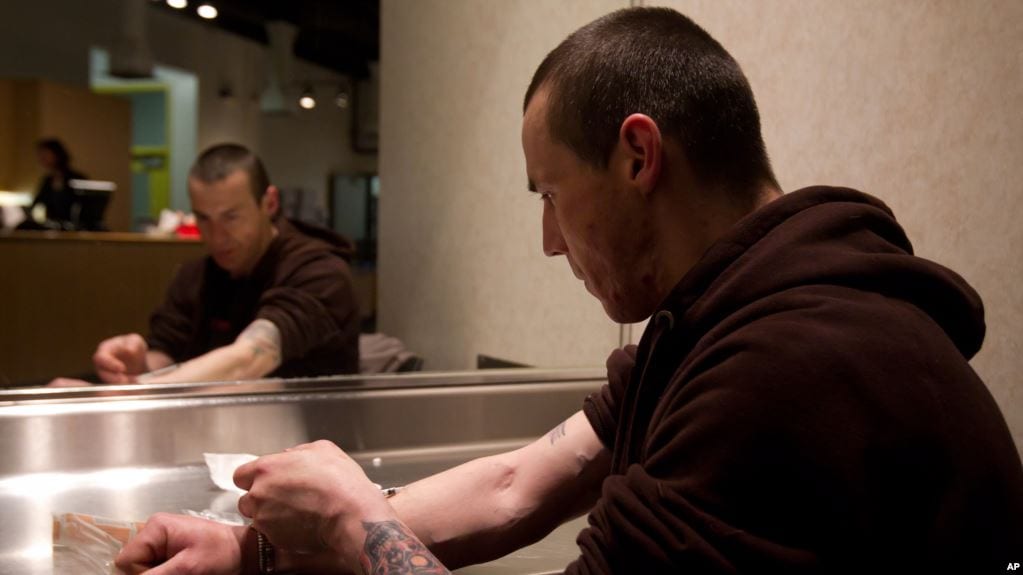 For nearly two decades, Vancouver, the epicenter of Canada’s increasingly deadly drug epidemic, has embraced an initiative that was once dismissed as a reckless experiment but has since won over some of its fiercest critics: a walk-in facility where addicts can inject heroin under the watch of medical professionals.

Allowed as an exemption under Canada’s drug laws, Insite operates out of a storefront in the drug- and crime-ridden neighborhood of Downtown Eastside. Inside is a quiet, spacious “injection room” with 12 booths where addicts can shoot up their own drugs using freely supplied clean needles and tourniquets.

Nurses keep watch from a nearby station. And in case of an overdose, a medical team is on hand to administer naloxone, the overdose-reversing drug.In the center’s 16-year history, not a single user has died of an overdose.

Now, as a deadly opioid epidemic wrecks American communities, Philadelphia, a city with over 1,100 overdose deaths last year and one of the most active heroin markets in the country, wants to be the first in the nation to adopt the Canadian model.

The mayor and the district attorney have endorsed the initiative. A former governor of Pennsylvania has incorporated a nonprofit organization called Safehouse to run the facility. And advocates have scouted locations with an eye on Kensington, an impoverished neighborhood that has borne the brunt of opioid-related deaths in recent years.

But the plan faces stiff opposition from federal prosecutors who say it violates a law against setting up facilities for illegal drug use. To prevent the facility from opening, William McSwain, the U.S. attorney for the Eastern District of Pennsylvania, last week asked a federal judge to declare the site illegal under a 1986 “crack house statute.”

“Normalizing the use of deadly drugs like heroin and fentanyl is not the answer to solving the epidemic,” McSwain told reporters.

McSwain wants advocates to change the laws not break them. But supporters of the project say changing the laws takes time and the time to embrace a concept with a proven track record of saving lives is now.

“All of these [facilities] have had a similar result: they’ve lowered the number of overdoses associated with the immediate area,” said Jose Benitez, a co-founder of Safehouse and executive director of Prevention Point, a needle exchange program. “We see the same thing happening in Philadelphia.

With more than 800 daily visits, Insite is the busiest facility of its kind in the world.In the 16 years since it opened its doors, Insite has recorded more than 1,000 overdoses, many potentially fatal without intervention. But not a single one has resulted in death. What’s more, researchers have found Insite users are more likely to seek out treatment.

“There are people who say that Insite sets a bad example and supports the initiation of drugs, but in fact what we found was that people who used Insite were more likely to stop using drugs,” said M-J Milloy, a research scientist at the British Columbia Center on Substance Use.

Milloy was part of a multiyear scientific evaluation of Insite mandated by the government of Canada. Among the study’s key findings: a 35 percent drop in overdose fatalities in the surrounding community.

He said scientists also examined whether the facility can encourage drug use and degrade the quality of life in the surrounding communities, as critics have claimed. They found the criticisms “to be wholly lacking in empiric support,” he added.

“There is a scientific consensus that these facilities can have important benefits, not only on the health and well-being of the clientele who use them, but also, indeed, in the surrounding community itself,” Milloy said.

“Based on our research, we believe Insite and other injection facilities to be important interventions that should be considered by any city or setting which is dealing with the negative consequences of injection drug use,” he added.

But Insite has not been without its critics who have questioned the scientific research. These critics say that while Insite has prevented overdose deaths, it has not led to a reduction in crime or drug use in the community.

The facility was designed as a three-year scientific experiment, but it has been allowed to operate indefinitely after a landmark ruling by Canada’s Supreme Court in 2011.

Inspired by the Insite’s success, nearly a dozen American cities and counties battling an opioid epidemic have taken up the idea in an apparent violation of federal law. In several cities, including New York, San Francisco and Seattle, local governments have worked out concrete plans for injection facilities, but it remains unclear if they can surmount opposition from federal and state authorities.

In California, the state Legislature last year passed a bill that would have allowed the city of San Francisco to operate a safe injection site on a pilot basis. But then-Governor Jerry Brown, a Democrat, vetoed the bill, citing the threat of federal prosecution.

Two state lawmakers reintroduced the bill recently, and current Governor Gavin Newsom, also a Democrat, has said he is “very, very open” to the idea.

Philadelphia, a storied Northeast city with a population of 1.6 million, has been hit especially hard by the opioid epidemic. Overdose deaths have more than doubled in the past five years.

That led Ronda Goldfein, executive director of AIDS Law Project of Pennsylvania, and Benitez to set up Safehouse and enlist former Governor Ed Rendell’s support. Rendell, who as mayor of Philadelphia in the 1990s allowed the city’s first needle exchange program, agreed to incorporate Safehouse and sit on its board.

A study commissioned by the task force estimated that the opening of a safe injection site could potentially avert between 24 and 76 opioid overdose deaths each year.

“There are people who fear that we’re somehow promoting drug use, but there’s evidence from these facilities worldwide that they don’t encourage drug use,” Thomas Farley, the city’s health commissioner who sits on the board of Safehouse, told VOA last year. Many “people have an immediate negative reaction, but the evidence is quite strong that they have a real positive effect on users and in the neighborhoods,” he added.

Unlike some other states, Pennsylvania doesn’t have a law against setting up a facility for drug use, and Safehouse is not seeking public funding. For those reasons, the initiative does not face state opposition, Goldfein said.

The federal opposition was long coming. In an op-ed in The New York Times last August, Deputy Attorney General Rod Rosenstein wrote that safe injection sites were illegal and he threatened “swift and aggressive action” against cities and counties opening them.

Goldfein said the site’s primary purpose is to prevent overdose deaths, not facilitate drug use, which would be illegal under federal law.

“We’re opening up a facility for the purpose of saving lives and for the secondary purpose of getting people into treatment,” she said. “That is a completely different intent from the reasoning behind crack house laws.”

Safehouse has 30 days to file its response to the federal complaint. The case is being closely watched by other cities and counties considering safe injection facilities.

If the federal judge hearing the case rules in Safehouse’s favor, “it will certainly be an important piece of information for other jurisdictions to go forward with,” Goldfein said.

Meanwhile, in Philadelphia, not everyone is convinced that an injection facility run by Safehouse is a good idea. David Oh, a Philadelphia City Councilman At-Large, said the center could spell trouble for the city.

“We’re the largest, poor big city in America with a lot of poverty issues, job issues and education issues,” said Oh, a Republican. “We’re inviting people to come live in our city and do their drugs here, and we’re going to service and provide for them, and the communities are trying to exist and don’t want them there.”