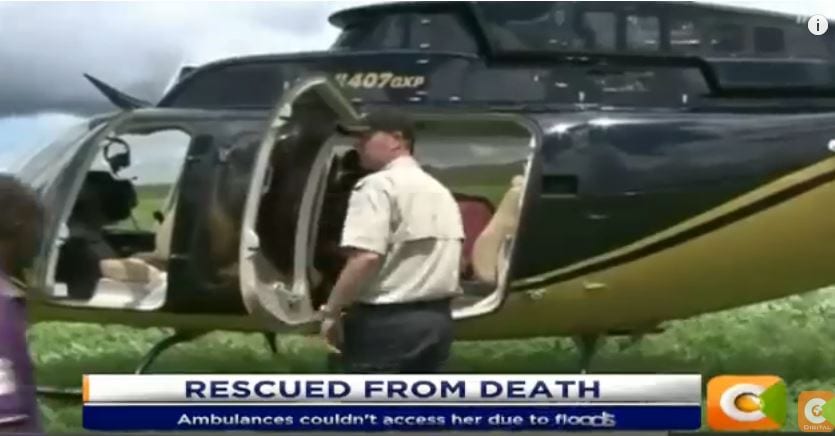 A pilot attached to government officials on Saturday rescued a middle aged woman, who was seven months pregnant and nursing gunshot wounds, from drowning in floods in Marsabit County.

Stephanus Kruger, who has been leading the rescue and relief dispatch to floods displaced families in Marsabit, had flown Devolution Cabinet Secretary Eugene Wamalwa and Marsabit Governor Mohamud Ali to assess the damage caused by floods when they heard a distress call made by a woman from Eborr village.

The woman, according to area Chief Karicha Boru, was shot twice in the leg by stray bullets fired by home guards who were pursuing a hyena that had attacked the village.

She was left stranded and bleeding the whole night as the ambulance that had been sent from Sololo Heath Centre could not access the village due to flooding.

A decision was quickly made for the pilot to land in a nearby village to drop the CS and the Governor together with their security team so as to create space in the chopper for the woman.

The woman was found lying in one of the manyattas in the village and a group of men quickly prepared a stretcher and carried her to the chopper where Captain Kruger and a doctor positioned her on a drip and ferried her to an awaiting ambulance along the highway.

According to William Wario, the only nursing officer in Eborr Dispensary, the ongoing heavy rains have rendered many roads impassable and there are no communication masts around to enable them communicate effectively during emergencies.

The hyena that was being chased was later killed.