Plan violence at your own risk – Uhuru to politicians 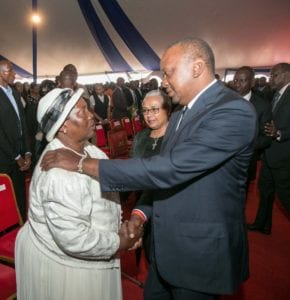 President Uhuru Kenyatta has warned Laikipia leaders against fomenting violence ahead of August 8 General Election forewarning that they will be met with the full force of the law.

“Those planning to incite violence, community against community and devising to cause trouble – let me tell them, they are dreaming.”

“It will not happen. We will not let you. You will be dealt with accordingly,” the President told mourners at the funeral of political icon GG Kariuki Friday.

The President faulted Laikipia politicians for sparking conflicts over grazing land and instigating attacks on private ranches, disturbing the peace of Laikipia residents.

President Kenyatta cautioned that individuals will not be allowed to invade private lands and destroy private properties in the name of political and tribal interests.

He urged both leaders and residents to uphold dialogue in addressing challenges facing the region instead of engaging in violence and lawlessness.

Paying tribute to the late veteran politician, President Kenyatta asked leaders to emulate the late GG Kariuki’s legacy and promote peace in the county and beyond.

“GG wanted people from different communities to live together in this county in peace and that is what we will ensure prevails,” President Kenyatta said.

The President, who was accompanied by First Lady Margaret Kenyatta, described the late Senator GG Kariuki as a patriot who served Laikipia County and the nation without discrimination.

President Kenyatta said the late Senator was a towering politician who mentored many upcoming leaders without fear of competition.

“He was not intimidated by competition. He was keen to impart knowledge for the betterment of the country,” President Kenyatta commended.