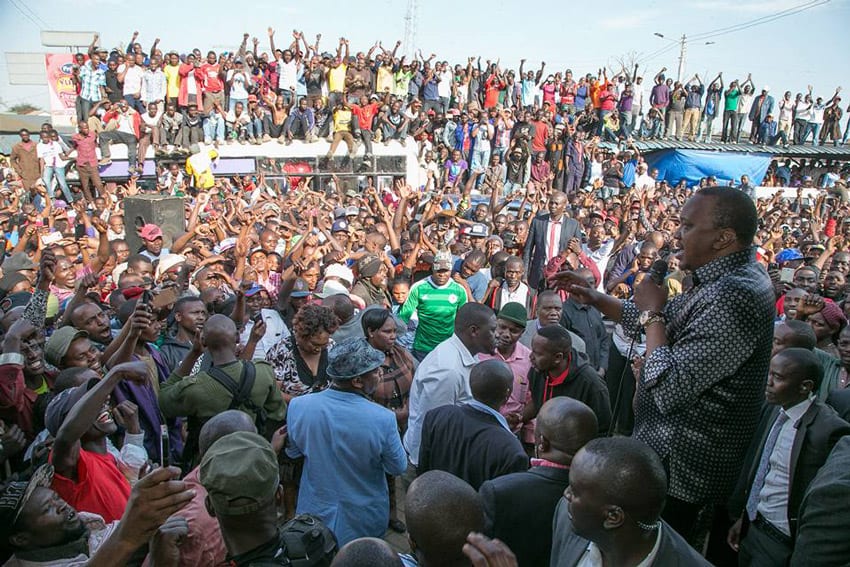 President Uhuru Kenyatta is set to spend Monday and Tuesday in Central Kenya in a visit that will involve the commissioning, launching and inspection of development projects as well as a meet-the-people tour, State House spokesman Manoah Esipisu has said.

According to State House, President Kenyatta will visit the counties of Nyeri, Laikipia, Kirinyaga and Murang’a during the tour that ends Tuesday afternoon.

On Monday, President Kenyatta will launch the Naromoru–Nairutia–Ngobit road link before opening the Mukurweini–Othaya Water Sewerage Plant in Mukurweini Constituency that will serve a total of 200,000 people in both Mukurweini and Othaya constituencies.

The Head of State will then visit Nanyuki Level 5 Hospital where he will commission the completed installation of equipment under the Managed Equipment Services (MES) completing his first day in the region.

On Tuesday, the president will visit Kerugoya hospital, inspect the ongoing construction of the 29 km Kutus–Kianyaga–Kimuthugu–Kithure–Kibugi Road and commission the Kangema–Gacharage C70 Road.

President Kenyatta will then visit Murang’a Level 5 Hospital before launching the Murang’a–Mukuyu–Gwathamaki Road in Murang’a County.

“The president will speak to leaders as well as other citizens in the areas – reaching out directly as he works to improve their livelihoods, as well as the livelihoods of all other Kenyans whichever part of the country they may be,” read a statement from Esipisu.

“The president will focus on key infrastructure projects like roads, as well as the success of his healthcare plan by commissioning specialised medical equipment at several hospitals in the area. These hospitals will provide theatre, renal, imaging, radiology and other diagnostic services.”

The visit of Central Kenya comes days after President Kenyatta’s trip to Webuye, Bungoma County where he did an extensive tour of the Pan Paper Mills factory.

The president is expected to return to Webuye on December 15 to formally reopen Pan Paper Mills.

On 28 April 2016, the Receivers of Pan Paper reached an agreement to sell Pan Paper to a local investor, Tarlochan Limited, paving the way for the revival of the company.

The company plans to inject an additional USD100 million over and above the purchase price of Ksh900 million over the next five years to rehabilitate the machines and improve on the establishment for the production of paper and to ensure that the plant is operational at full capacity.

Meanwhile, the Ministry of Sport and Culture is expected to hand over the report on the 2016 Rio Olympics challenges to the president this week.

According to State House, the report focuses on the issues of governance and systemic problems concerning sports in the country.

The president will decide on the way forward when he receives the report.