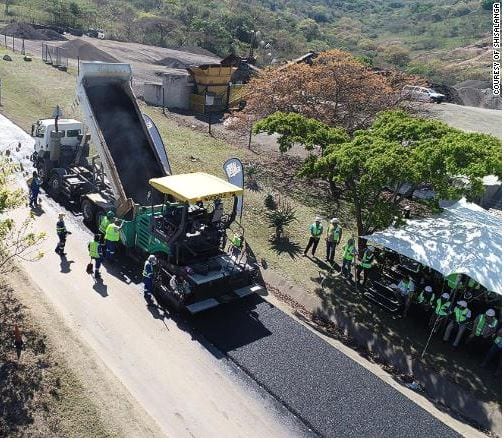 A company in South Africa has is now using recycled plastic milk bottles to make roads.

Shisalanga Construction Company is the first in South Africa to lay a section of road that is partly plastic.

The road is situated in KwaZulu-Natal (KZN) province on the east coast.

According to CNN, the company has now repaved more than 400 meters of the road in Cliffdale, located on the outskirts of Durban.

They used asphalt made with the equivalent of almost 40,000 recycled two-liter plastic milk bottles.

CNN reported that Shisalanga uses high-density polyethylene (HDPE), a thick plastic typically used for milk bottles through a local recycling plant that turns it into pellets.

They are heated to 190 degrees Celsius until they dissolve and are mixed with additives.

Later, they are replaced with six percent of the asphalt’s bitumen binder, so every ton of asphalt contains roughly 118 to 128 bottles.

Although the cost of making the roads is similar to to the existing one, Shisalanga Company says fewer toxic emissions are produced than during traditional processes.

Its compound is reportedly more durable and water resistant than conventional asphalt, with the roads expected to last longer than the national average of 20 years.

The move is however not new in the world, as CNN reports that India began laying plastic roads 17 years ago.

A similar concept has been tested across Europe, North America and Australia although there have been concerns over potential carcinogenic gases created during production and the release of micro plastics as the roads wear out.