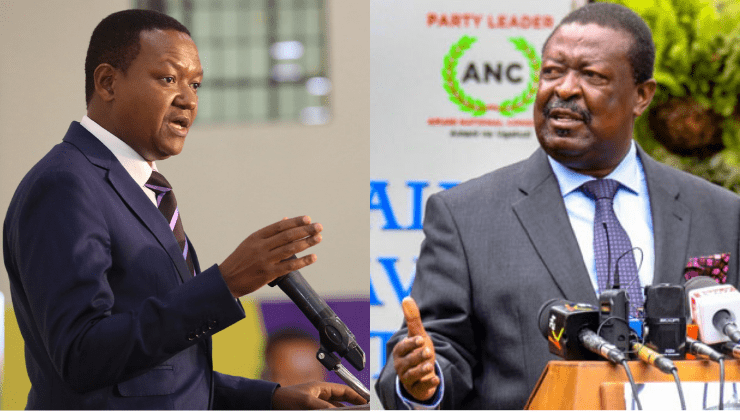 Mutua says over the last one year his team has noticed that every time he announces a new idea Mudavadi picks it up a few days or weeks later.

“In the last one year, my supporters and I have noticed that every time I go public with an idea, a concept and even part of my manifesto, a few days or weeks later, Hon. Musalia Mudavadi, comes out and says the same things or attempts to replicate what I have done,” said Mutua in a statement issued on Wednesday.

The Maendeleo Chap Chap leader pointed out that after launching his 2020 presidential bid two weeks ago and branding himself as a “safe pair of hands” Mudavadi is now following suit.

“A few weeks ago, during my speech as I announced my 2022 candidature, I said that I was a “Safe Pair of Hands” with both national and county experience and that I was a neutral and balanced leader – what Kenyans need,” Mutua added.

“A few days later, Hon. Musalia Musavadi copied me and declared he was a “safe pair of hands” for similar reasons as mine.’

He further stated: “This has been going on for long enough. It has reached such high levels that when I strategize with my team, we joke that we have to be hush hush or Mudavadi and other leaders will copy us.”

The Machakos Governor further alleges that Mudavadi was copying him when the ANC leader sent out a message in Sheng, thanking his supporters for sending him birthday wishes on September 21.

“I have been addressing the youth in their street lingo “Sheng” and have videos in Sheng about shunning tribalism and also recently, calling on them not be spectators in the political arena. Now again, Hon. Mudavadi, has copied me and released a video targeting the youth where he struggles to speak in Sheng to them,” says Mutua.

PLEASE STOP COPYING ME HON MUDAVADI. COME UP WITH YOUR OWN ORIGINAL STRATEGIES AND IDEAS pic.twitter.com/fPtlgiBxlV