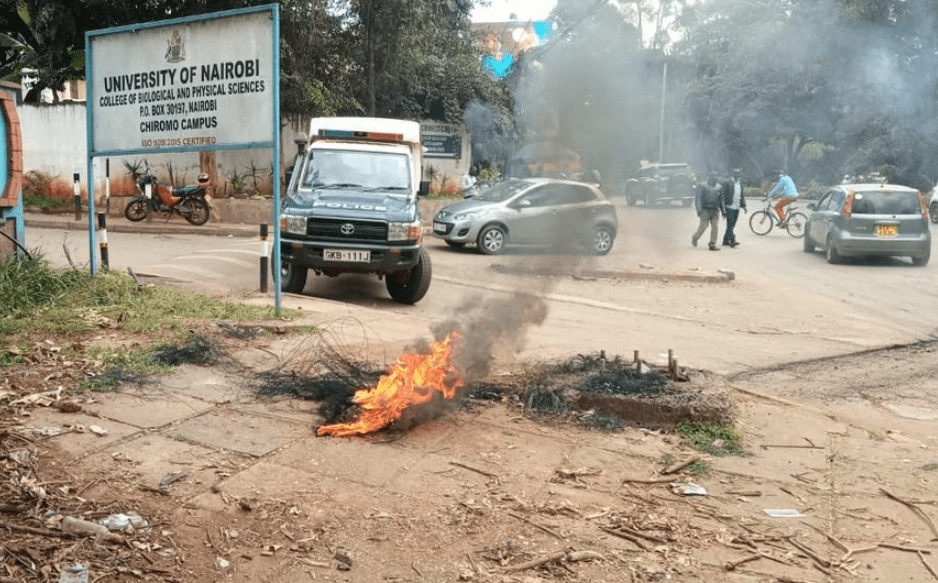 Police officers were on Wednesday forced to lob teargas to disperse University of Nairobi (UoN) students who were demonstrating over fee increment along University Way and Uhuru Highway.

The police officers are currently manning all the entrances of the main campus to bar the learners from getting out and taking to the streets, even as a few of them are said to have been arrested.

At KNH campus, the students who were restrained from hitting the road in their planned protest have vowed to ensure they will take to streets.

The agitated students, through their union, had issued a 48-hour ultimatum to compel the university administration against implementing the fee hike among other restructuring efforts at the institution.

UoN Vice Chancellor Prof. Stephen Kiama recently said the recent fee increment will not apply to already admitted students but only to new ones seeking to join the institution henceforth.

Prof. Kiama, speaking on Citizen TV on Monday night, sought to defend the fee review saying it was approved a long time ago and the institution is just implementing it.

The UoN VC also rubbished reports that the fee increment was effected by 118 per cent, saying this figure was only a figment of imagination.

“There was no fee increment by 118 per cent, these are just calculations by people, I said that there is what we call differentiated unit costs which is there in the University Act 2012, it is agreed and it is aligned on 14 clusters. Each program falls under different fee cluster, and that was approved long time ago, it is not new,” he said.

“But the application of this fee, we said now progressively as the university continues to run, we charge it not for the students who are on session now, because those we have contracts with them, but if you join in the future you must pay the fee that is required. It does not apply whatsoever to any admitted student.”

He also defended the move to slash the number of courses offered at the university from 579 to 324 saying some of them admitted very few to zero students despite being allocated resources.

According to the VC, some of the programs were also similar in their coursework hence creating duplication of resources.