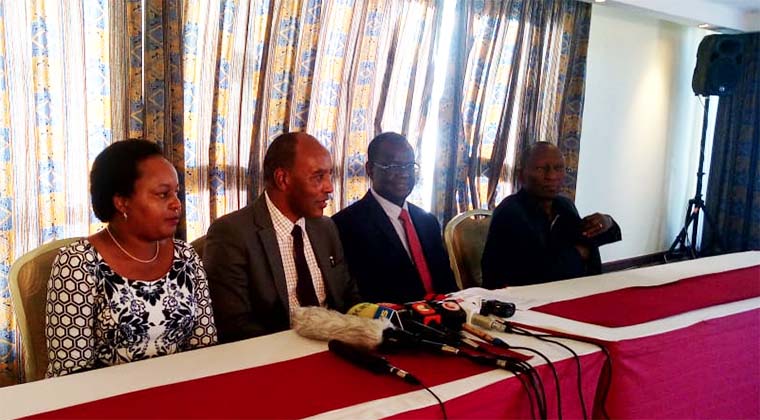 Ten Governors from the Central Kenya region have come condemned allegations against President Uhuru Kenyatta that he has focused on projects elsewhere and neglected his home turf.

Speaking during a Press conference on Friday, the Governors who represented by Anne Waiguru (Kirinyaga), Francis Kimemia (Nyandarua) and Kiraitu Murungi (Meru) further termed the claims as ‘irresponsible, disrespectful and insulting.’

“Leaders making malicious statements on state of inequitable development must understand that you cannot deliver a five-year project in a span of one year and therefore it is unfortunate for a section of leaders to mislead and incite the population,” they said.

Mr. Kuria has since apologised for the remarks beating a hasty retreat with the words: “I have the utmost respect for the President.”

President Kenyatta on his part did not take kindly to the accusations.

“Nitaendelea kuzunguka kila corner ya Kenya na kazi ya maendeleo…kutoka Mombasa hadi Kisumu, Moyale hadi Namanga ..hii siasa ya kusema ya kwamba mtu ametoka mahala fulani ati maendeleo itaelekezwa mahala fulani jamani tuwahe (I will continue to traverse every corner of Kenya, bringing growth and development; from Kisumu, Moyale, up until Namanga. This politics of saying someone comes from such and such a place so development should be made in that region should stop),” he said.

“Every citizen is entitled to development regardless of where the leader comes from, kwa hivyo hao washenzi muwachane na mimi (so those fools should leave me alone).”

On Friday, the Governors at the Press Conference, under the Central Kenya Economic Bloc, further criticised the 2022 succession debate saying it is premature.

According to them, talks over who will take over the presidency are ‘unpatriotic and a betrayal to voters.’

In the statement read by Governor Kimemia, the county leaders further demanded that politicians respect the President and efforts he has made to ensure that Kenya remains a peaceful country.

“We therefore call upon leaders especially elected leaders from the Central region and Kenya at large to support His Excellency President Uhuru Kenyatta and the Jubilee administration as he guides the country through the Big Four Agenda,” he said.