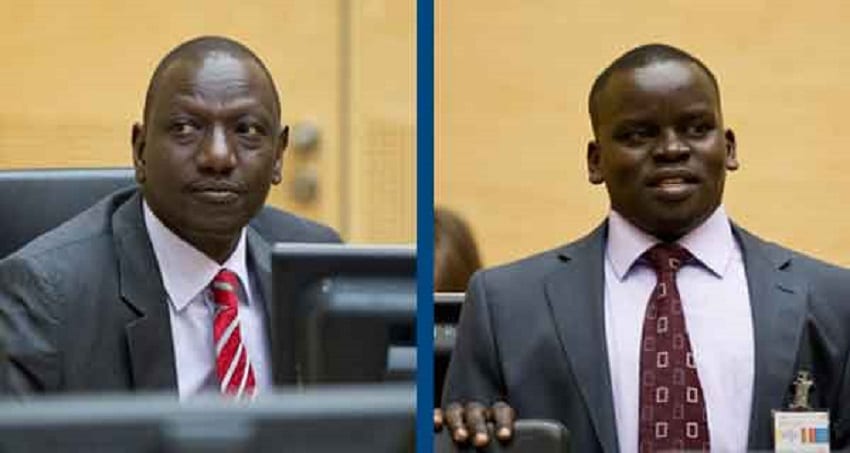 Lari Member of Parliament Mburu Kahangara has called on Kenyans to continue praying for Deputy President William Ruto and journalist Joshua arap Sang for their Hague cases to be terminated.

Speaking at Kaaga village in Lari, Kahangara called on Kenyans to focus on moving the country forward and avoid divisive issues from the past, including the 2007 post election violence.

Speaking separately, Mosop MP Stephen Bitok has called on the International Criminal Court (ICC) to terminate the case against Ruto and Sang, saying there is insufficient evidence to prosecute them.

Bitok was optimistic that the no-case-to-answer application by the duo at The Hague will sail through, saying the country is already on the path to reconciliation, with IDPs being compensated and resettled after the 2007 post poll chaos.

This comes after the ICC Appeals Chamber decided unanimously to reverse the Trial Chamber’s decision on 19th August 2015, allowing Prosecutor Fatou Bensouda to admit prior recorded testimony into evidence, based on amended rule 68 of the Rules of Procedure and Evidence.

On  Friday, the ICC Appeals Chamber rejected the use of prior recorded testimony in their case.

The legal error made by the Trial Chamber, according to the Appeal’s Chamber, is that the application of Rule 68 on recanted evidence was retroactive, as the trial had started on 10th September 2013 before the amendment of the rule.

This means that by using recanted evidence it would negatively affect Ruto and Sang’s position as they would not have the right to cross-examine the witnesses and that they did not expect that evidence was going to be used against them after it was recanted.