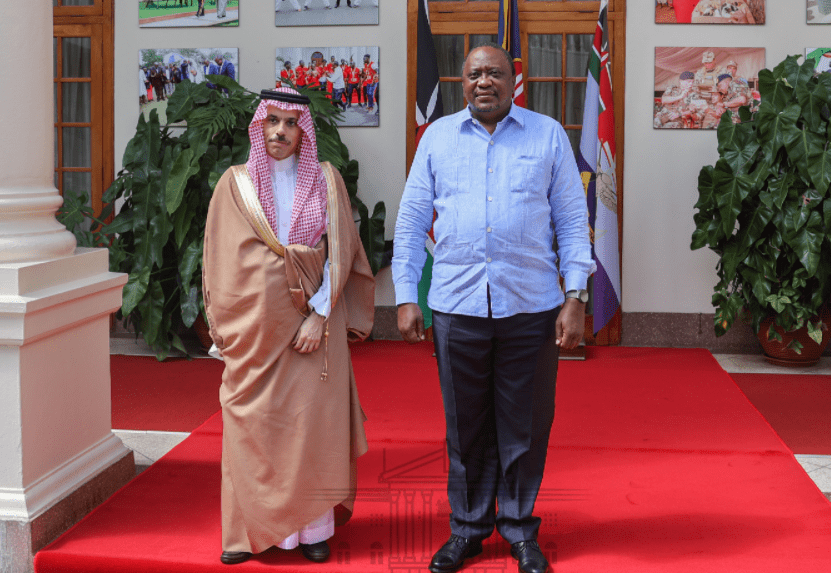 During their talks, the President and his guest discussed the strong bilateral ties between Kenya and Saudi Arabia, noting that the two countries were keen on deepening their relations going forward.

Through the Foreign Affairs Minister, President Kenyatta assured King Salman bin Abdulaziz Al Saud of Saudi Arabia of Kenya’s strong commitment to the expansion of the two countries partnership in trade, security and investments to cover other areas of mutual interest.

“We need to look at different partnerships to be sure we do not lose out. We are grateful for the development support Saudi Arabia gives us. We need to strengthen our partnerships in trade, business and investments.

“We also need to establish excellent initiatives, have outstanding agreements and strengthen our political network to enhance our bilateral relations,” the President said.

President Kenyatta welcomed Saudi Arabian businessmen to invest in Kenya’s active infrastructure sector within the Public Private Partnerships (PPP) framework, and informed the visiting Minister of the country’s keenness on the revival of meat exports to the Middle Eastern country.

“Kenya is an ally of the future. We share various interests in a number of issues especially regional security and trade.

“We can work on a business forum to bring together our business community as we work and support each other,” President Kenyatta proposed.

On his part, the Saudi Arabian Foreign Minister assured the President of his government’s commitment to continue partnering with Kenya in achieving its development goals.

“You have a partner in Saudi Arabia. We have the same vision and we will continue working together,” Prince Faisal said.

The Minister, who was accompanied by Deputy Minister of State for African Countries Affairs Amb Dr Sami Alsaleh, said his country enjoys true friendship with Kenya and reiterated the President’s proposal to explore new partnership opportunities.

Present during the talks were Foreign Affairs CS Raychelle Omamo and the Ambassador of the Kingdom of Saudi Arabia to Kenya Dr Mohammed Khayat.