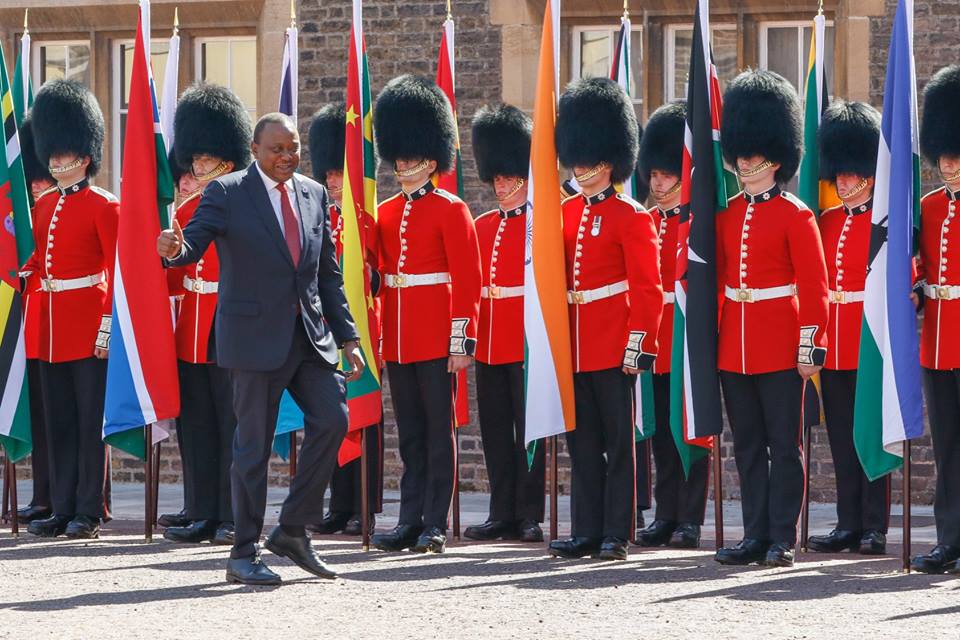 President Uhuru Kenyatta jetted back into the country on Sunday evening from the UK where he attended the Commonwealth Heads of Government Meeting (CHOGM) and held bilateral meetings to promote Kenya’s agenda of securing investment and bolstering trade.

The plane carrying the President with his entourage touched down at the Jomo Kenyatta International Airport (JKIA) shortly before midnight.

Senior Government officials led by Deputy President William Ruto and Chief of Defence Forces Gen. Samson Mwathethe were at hand to receive the President on arrival at the airport.

While in the United Kingdom, the President took the opportunity to market Kenya by tapping into two hugely popular and robust platforms, the policy think-tank Chatham House, and broadcaster CNN.

At the end of the summit on Friday evening, the Commonwealth Secretariat announced that the leaders had adopted a Commonwealth Blue Charter laying out the strategy for economic development through oceans.

Kenya was chosen to champion the development of ‘blue’ economic growth through the Commonwealth Blue Charter adopted by CHOGM 2018.

At the summit, Kenya stressed the need to prioritise the protection of oceans, and the need for the world to come up with better mechanisms to use oceans for economic development.

Kenya emerged from the summit with an endorsement across the board for its new role as a champion for blue economic development with Canada offering to co-host a Blue Economy Conference to be held in Nairobi on November 26-28 this year.

The high-profile blue economy summit is billed to be a massive conference similar to the WTO meetings and the UNCTAD summit previously held in the Kenyan capital.

Trade and investment between Kenya and post-Brexit Britain were also one of the priority issues on President Kenyatta’s agenda during the UK visit.

The UK has been a strong trading and diplomatic partner for Kenya. At least 220 UK companies worth £2.7 billion operate in Kenya and employ 250,000 Kenyans.

President Kenyatta is a strong supporter of intra-Africa trade and is championing the adoption of the Africa Continental Free Trade Area (AfCFTA). Kenya is expected to be among the first countries to ratify the agreement.

At the Commonwealth summit, President Kenyatta said the AfCFTA provides an opportunity that would enable Africa to create prosperity and create jobs for its youth.

The President met the UK leadership including Her Majesty Queen Elizabeth II, Prince Charles and Prince William, as well as Prime Minister Theresa May.