Uhuru lands in Kisumu ahead of Mashujaa Day fete in Kakamega 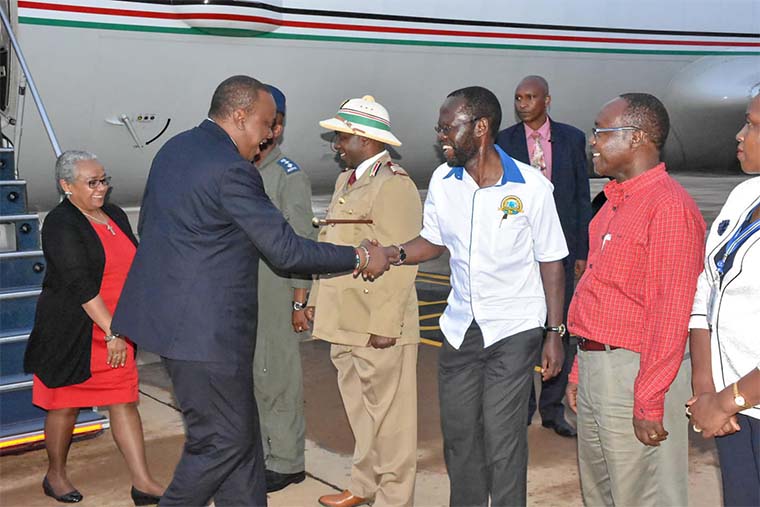 President Uhuru Kenyatta has arrived in Kisumu ahead of the Mashujaa Day celebrations scheduled for Saturday in Kakamega.

His plane touched down at the Kisumu International Airport on Friday evening.

Kisumu Governor Anyang’ Nyong’o was at the airport to receive the Head of State who travelled with First Lady Margaret Kenyatta.

The last time President Kenyatta was in Kisumu was in July 2017, a month before the general election.

He and his Deputy William Ruto visited Homa Bay and Kisumu counties as part of their campaigns for the Jubilee party.

Following the much publicised handshake with NASA leader Raila Odinga in March this year, rumours were rife that the President would return to the county.

There were claims that he was to officiate the Kisumu County Universal Health Coverage registration exercise.

However, the Governor’s Press team denied the reports saying: “The Office of the Governor has neither been informed nor made aware of any such developments and requests that such rumours should desist forthwith.”

Pundits maintain that his arrival in Kisumu on Friday before he heads to Kakamega for the Mashujaa Day celebrations is “one of the fruits of the handshake”.

On Thursday this week, it also emerged that President Kenyatta and Mr. Odinga are to be honoured at the 2018 London Political Summit for their unity deal.

Even as the political landscape shifts as a result of the “handshake”, issues such as the proposed referendum and the 2022 State House race continue to generate heated debates across the divide.

Mashujaa Day is celebrated on October 20 every year to commemorate heroes and heroines who have made great contributions to the country.

We celebrate our heroes and heroines for going out of their way to make a difference in our country. Let's explore the limitless possibilities within ourselves during this Mashujaa Day.#Mashujaa2018 #KenyaMbele@InteriorKE @WanguiMuchiri @Karanjakibicho @StateHouseKenya pic.twitter.com/wEUlag2Tej

Visiting Namibian President Hage Gottfried Geingob is among other dignitaries expected at the Mashujaa Day fete in Kakamega.