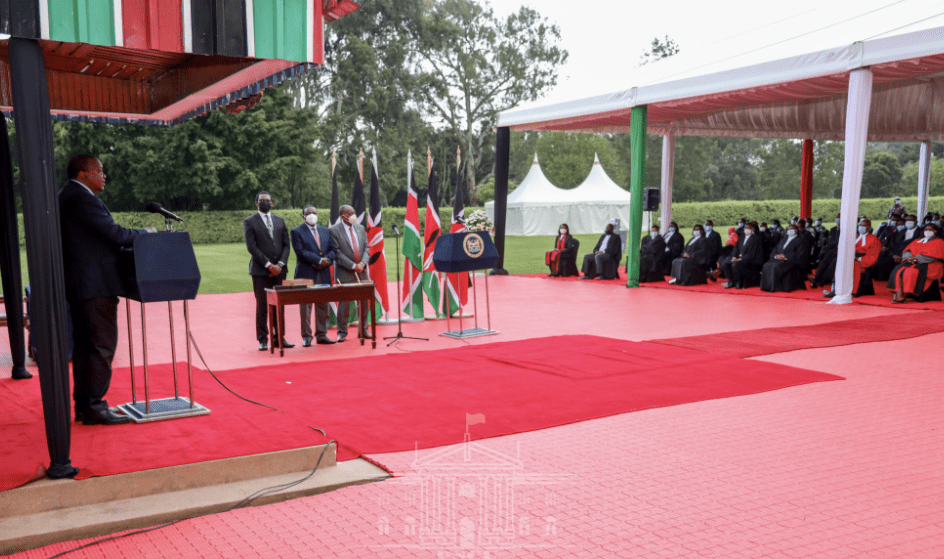 President Uhuru Kenyatta has defended his decision to reject the nomination of six judges who had been recommended by the Judicial Service Commission (JSC) for appointment.

The Head of State, while brushing aside criticism for appointing 34 out of the 40 recommended judges, hinted without elaborating that the 6 nominees he rejected had integrity issues that had been detailed by the National Intelligence Service (NIS) and other security agencies.

Attention now shifts to Chief Justice Martha Koome and the JSC that she chairs to determine the next course of action for the 6 rejected judges.

President Kenyatta on Friday spoke when he played host to and witnessed the swearing-in of the 34 judges picked to join the Court of Appeal, Lands and Environment High Court division as well as the Employment and Labour Relations Court.

The President directly responded to a barrage of criticism directed his way, after declining to appoint High Court Judges Joel Ngugi, George Odunga, Aggrey Muchelule and Weldon Korir to the Court of Appeal. He also rejected JSC’s recommendation to appoint Judith Omange and Evans Makori as judges in the Lands and Environment Court.

“Just like you today, I too took an oath to both the letter and the spirit of the law; and it is not open to me as to turn a blind eye to reports of our state organs,” he said.

The President however did not disclose the integrity issues raised against the six nominees, with critics reading malice in his rejection of Ngugi and Odunga who sat in the 5-judge High Court bench that stopped the BBI reggae and declared the clamour for constitutional amendments through popular initiative as unconstitutional, null and void.

Omange, the High Court Registrar and Makori, a Chief Magistrate, are Judiciary insiders whose elevation was rejected by the President.

President Kenyatta appeared unfazed by pundits who hold that he could not cherry-pick the nominated judges, his failure to appoint the 41 nominees the source of constant friction with immediate former Chief Justice David Maraga.

“All of those that are honoured with the service to the nation; the Judiciary, the Executive, or the Legislature, we have a collective duty to service the people of Kenya, all 50 million of them both here at home and abroad. We are one government bound together by our common duty to deliver the hopes and dreams of Kenya,” stated the Head of State.

All the 34 judges appointed by the President turned up for the swearing-in ceremony at State House, Nairobi.

Msagha Mbogholi, Hellen Omondi, Mumbi Ngugi, Francis Tuiyot, Pauline Nyamweya and Jessie Lesiit join the Court of Appeal from the High Court. Legal scholar Dr. Kibaya Imana Laibuta was the only outsider who joined the Appellate Court from the world of academia.

They join 13 serving judges and are eligible for appointment to the 7-judge bench that will hear and determine the BBI appeals.

Nine judges were appointed to the Employment and Labour Relations Court, 18 others joined the Lands and Environment Court.

“My only advice to you  is one: serve with dedication and with utmost fidelity to the oath that you have subscribed to. You’re the bastions of justice, defenders of liberty, instruments of law and order, guardians of the rule of law, and the embodiment of the hopes and dreams of our people,” he said.

With President Kenyatta returning to JSC names of 6 nominees whose appointment he rejected accompanied by reports detailing specific allegations against them, focus shifts to Chief Justice Martha Koome, who chairs the commission, and her team to determine the next course of action for Ngugi, Odunga, Muchelule, Korir, Omange and Makori.

CJ Koome has since asked President Kenyatta to appoint the 6 judges he rejected, pointing out that there is dire need for them as the backlog of cases is increasing.