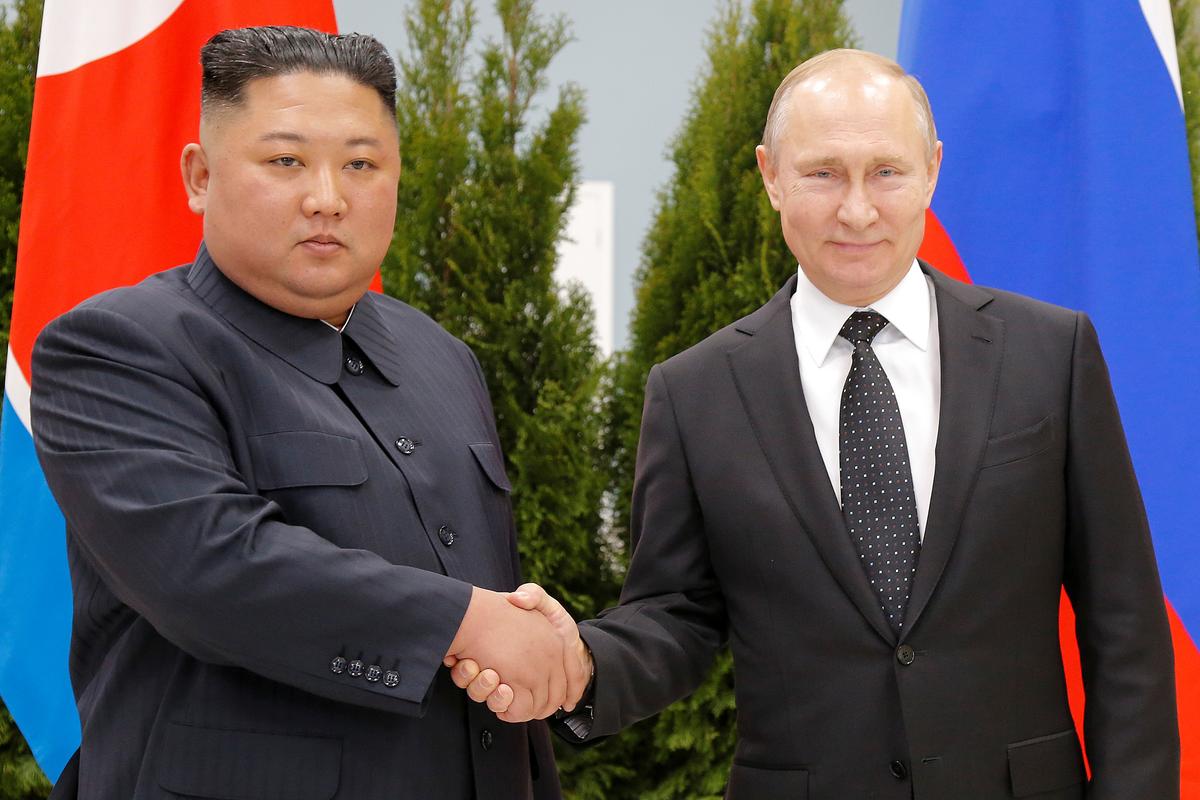 Russian President Vladimir Putin capped a week of high-profile diplomacy on Friday, when he appeared at the Belt and Road Forum in Beijing — and received an especially warm welcome from Chinese President Xi Jinping.

“President Putin is a good friend and an old friend to Chinese people,” Xi said. “And he is my closest friend.”
Friendship was also on the agenda in Putin’s summit meeting Thursday in the Russian city of Vladivostok with North Korean leader Kim Jong Un. In Vladivostok, Putin positioned himself as an essential broker for resolving the nuclear crisis on the Korean peninsula, and as a prominent player on the world stage.

Speaking to reporters after the summit, Putin said he would relay the results of the summit to Xi — as well as to the Trump administration.
“Of course, I will speak tomorrow in Beijing with the leadership of the People’s Republic of China, but we will also openly and frankly discuss today’s meeting with the American leadership,” he said. “There are no secrets here, Russia’s position is always open, there are no conspiracies.”
Left unsaid, however, was the fact that US President Donald Trump had recently fallen short in his attempt to coax a denuclearization deal out of Kim. Back in February, Trump cut short a summit meeting with the North Korean leader after Kim insisted all US sanctions be lifted on his country.

“Sometimes you have to walk,” Trump said.

But where the United States walks, Putin often sees opportunity.
Take the killing of journalist Jamal Khashoggi, which roiled Washington and seriously threatened to undermine ties between the United States and Saudi Arabia. Amid international outrage over Khashoggi’s death, the Kremlin was notably silent on the case.
US officials have said a mission to persuade Khashoggi to return from Istanbul to Saudi Arabia — including 15 men sent from the Saudi capital of Riyadh — could not have been carried out without the authorization of Crown Prince Mohammed bin Salman, the country’s de facto ruler. Riyadh has maintained that neither bin Salman nor his father, King Salman, knew of the operation to target Khashoggi.
“How can we, Russia, start spoiling our relations with Saudi Arabia without knowing what in fact happened there?” Putin said.

Or take the Philippines, a traditional ally (and former colony) of the United States. In 2017, Philippine President Rodrigo Duterte, an admirer of Putin, paid an official visit to Moscow. It was a crucial moment: The Russian government was opening doors to Duterte amid major US criticism over alleged human rights abuses in the Philippines’ drug war.
And then there’s the crisis in Venezuela, where the Kremlin is throwing its support behind embattled Venezuelan President Nicolas Maduro. With provocative but low-cost gestures such as flying Russian bombers capable of delivering nuclear weapons to Venezuela last year, Putin has signaled that he can play in the Western hemisphere — the United States’ backyard.
Putin seems to be stepping in everywhere that US power is seen to be waning. So does that mean Putin is some sort of geopolitical chess master, deftly moving his pieces in every confrontation around the world?
The answer, most close Russia-watchers say, is no. Putin’s foreign policy is not guided by some messianic ideology, much as the Soviet Union propagated Communism during the Cold War. Putin may consistently define his position in opposition to those of Washington — casting himself as a staunch defender of state sovereignty against efforts to promote democracy and human rights in other countries — but his policies can also be ad hoc and improvised.
Perhaps the most illustrative recent example is in Sudan.
As CNN reported this week, a crackdown earlier this year by Sudanese President Omar al-Bashir appeared to have guided by a Russian playbook. Government and military sources in Khartoum confirmed to CNN that Bashir’s government received — and began to act on — a strategy of spreading misinformation on social media, blaming Israel for fomenting the unrest, and even carrying out public executions to quash demonstration.
But the strategy here was offered not by the Russian government, but by a sort of foreign-policy entrepreneur: a Russian company tied to an oligarch favored by the Kremlin, Yevgeny Prigozhin.

Prigozhin was one of the Russian nationals indicted by the special counsel Robert Mueller for allegedly meddling in the 2016 presidential election. According to the indictment, Prigozhin controlled Concord Catering, a group that funded the Internet Research Agency, the so-called troll farm that sowed misinformation online to target US voters in 2016.
Mark Galeotti, a prominent observer of Putin’s Russia, describes this kind of improvised foreign policy as part of the Kremlin’s “adhocracy”: political entrepreneurs and actors who take action to please the boss (in this case, Putin). Sometimes those actions may have full official sanction, and sometimes they may not. And as in the case of Sudan, they do not always work — Bashir was deposed in a coup earlier this month.
In Vladivostok, Putin spoke in lofty terms, telling reporters the discussions with Kim focused on efforts to “restore the rule of international law and revert to the position where global developments were regulated by international law instead of the rule of force.”
But in Sudan as in North Korea, Putin’s definition of international law means concerns over human rights and democracy end at that country’s borders.