Film review: ‘Rafiki’ is more than just a lesbian film 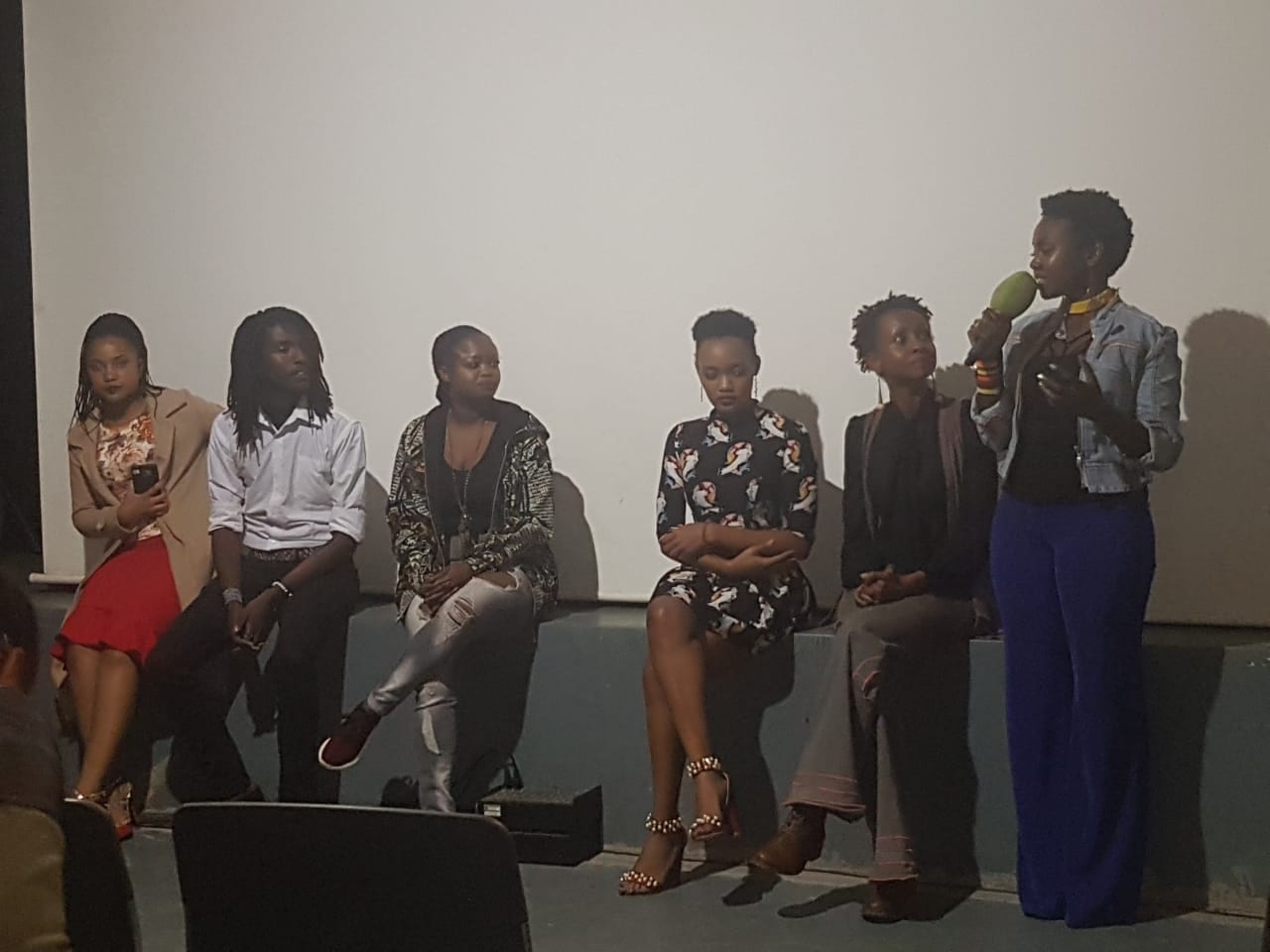 ‘Rafiki’ – a film by Wanuri Kahiu – has received a lot of flak and praise in equal measure about the aspect of homosexuality upon which it is mainly grounded.

But, as I sat down with fellow media colleagues and industry players as well as a section of the cast during a screening and panel discussion at Goethe Institut on Wednesday evening, I had the feeling that the film is more than just about two girls falling in love and getting ridiculed for choosing to go against cultural norms: ‘Rafiki’ is a film about hope, politics, dreams, drama, societal expectations, and – every now and then – a fair dose of humour served by the gossip-prone Mama Atim (played by Muthoni Gathecha.)

The film starts out with Kena (Samantha Mugatsia), a tomboyish teen from a broken home waiting for her high school results, skating through the neighbourhood (Slopes) and hanging out with her “boys” BlackSta and Waireri.

Kena stays with her sickly mother Mercy (Nini Wacera) while at the same time, helping her father John Mwaura (Jimmy Gathu) run a local store in the neighbourhood as he runs for a political seat.

On the other side of the spectrum is Ziki (Sheila Munyiva), an beautiful uptown girl sporting multi-coloured hair who comes from a fairly well-to-do background and spends most of her free time with her two girlfriends dancing to popular songs and, like every other urban millennial, presumably laughing at memes on social media.

Her father, Peter Okemi (Dennis Musyoka) is a no-nonsense man who is also seeking the same political seat as Kena’s father on a “Man of Action” slogan.

How do the two girls meet? One day Kena notices Ziki and her bourgeois girlfriends bringing down her dad (Mwaura’s) posters and chases them down a block or two before Ziki stops and confronts her. For five seconds, the two stare into each other’s eyes but instead of cold stares and bitter words, we have lingering looks and smiles; not a word spoken between the two but a lot is communicated and a special bond emerges.

The next time they run into each other, Ziki apologises for her hooliganism and she is forgiven. After that, the two start spending a considerable amount of time together to the neighbourhood’s dismay. Then they fall in love.

Their relationship unravels and blossoms beautifully – they go on dates and talk about their fears and dreams and attend parties – and the good time comes to a screeching halt – albeit momentarily – when Ziki’s mother finds them kissing in her room.

They flee to their secret hideout where they are found by Mama Atim who calls the rowdy neighbourhood boys on them and they are beaten to within an inch of their lives.

Left half-dead, the two lovebirds are then taken to the police station where each of them is picked up by their parents.

The morning after, Kena finds her dad bringing down his own posters because “there are some things I cannot do anymore.” To which Kena responds; “You’re losing the election because of me,” (presumably referring to her now public sexual orientation) and they cover each other in a warm embrace with tears streaming down their eyes.

Some of the most interesting things about the movie include the fact that one of its lead stars, Samantha (Kena), was acting for the very first time and what a debut.

“The story behind her is that Wanuri was at a gig and Samantha is a drummer with a band called ‘Yellow Live Machine’… Wanuri saw her playing and said, ‘that’s her and I will do whatever it takes to get her in this film,’” narrated Patricia Kihoro, the film’s Music Director and cast member.

Munyiva, on playing the role of Ziki, said that she was assigned an acting coach with whom “we created the look and the feel for Ziki; how does she walk? how does she talk? what inspires her?, and then once that was done I spent about a week living like Ziki.”

The Kenya Film Classification Board (KFCB) banned the film because of “it’s homosexual theme and clear intent to promote lesbianism in Kenya is contrary to the law.”

The ban came just days after KFCB CEO Ezekiel Mutua had applauded the movie director Wanuri Kahiu during an interview on Hot96 with Jeff Koinange saying, “I had a great meeting with Wanuri Kahiu, one of the greatest Kenyans that we have in the film industry and her movie has been nominated. Cannes is big, other than the Oscars, Cannes is the best.”

Mutua has since, in an unprecedented turn of events, become one of the greatest critics of the movie. Responding to allegations of hypocrisy on his part, Mutua – in an interview on Citizen TV’s Monday Special with Anne Kiguta – tossed blame on Wanuri saying she refused to edit out scenes in the film that “glamourise or glorify homosexuality as required by the law.”

But, responding to the ban and subsequent lifting of it for seven days by the court, the cast members stated it was a pity that, as creatives, their voices are even being silenced in the first place and that they had to result to such measures to get it screened in Kenya.

For Rafiki to be eligible for best foreign-language film Oscar consideration, it must be screened in Kenya before September 30.

“I do not want to live in a space that will limit my creativity and it’s dumb that we accept banning,” said Casting Director Nini Wacera who also plays Mercy in the film.

“I am 40 years now, I have been doing this for 20 years; I know what it feels like to not be allowed to just fly, I have a 17-year old daughter and all I want is for her to fly, so to hell with anyone who thinks they can tell us what to do and what to not do,” she added.

My opinion on how the girls meet and quickly fall for each other is based on Time; I feel like the creator made them discover each other too early into the movie, which is understandable considering the fact that they had a heavy plot to fit into an hour and twenty minutes. But I still feel like they met each other too early into the movie – about five minutes in – and fell in love too quickly – by around the third meeting or so – which I find a bit unrealistic.

The relationship between parents and their homosexual children is also manifested in how differently the two sets of parents react after finding out that their daughters are lesbians and are dating.

The first scene this is manifested is at the police station where Ziki’s dad arrives and the first thing he does is slap her and tell Kena to “stay away from my daughter.”

Kena’s dad, on the other hand, walks into the police station and straight to the OCS’ office, then comes out and covers his daughter with his own jacket and hugs her.

Secondly, Mwaura is willing to give up his political ambitions after Kena’s status is public and accept her for what and who she is; as opposed to even her own mother (Mercy) who says she has a demon in her and takes her to church for prayers.

Okemi, instead of accepting his daughter, chooses to punish her by sending her off to London, in an attempt to make her cut links with Kena.

In every sense, I think Wanuri Kahiu is a creative genius who picked up a story I thought was going to be stale and boring and turned it into a masterpiece that made even Academy-award winning Australian actress Cate Blanchett break down during the screening at Cannes Festival.

‘Rafiki’ is a beautiful film that plays around with your emotions in an annoying yet creatively fun way; some scenes get you breaking down and asking around for tissue, other scenes make you laugh while choking on popcorn, and yet even others get your blood boiling with anger.

For instance, when Kena jokes that she does not want to grow up cooking chapatis and Ziki retorts; “nobody likes cooking chapatis.” That really hurt me because I feel like the reason most marriages break is because people are not willing to learn the proper art of cooking chapatis. chapatis have been known to cure a lot of things like stress, depression, anger and impotency.

Instead, what we got were a couple or so mild make-out scenes here and there. I did not think the film would blow me off my heels, because I consider myself a difficult man to impress, but it did.

That film was magnificently created and, if you haven’t watched it yet, I gladly urge you to buy a ticket now.

Having said that, it is almost 24 hours since I watched the film and I am yet to turn gay like Mr. Ezekiel Mutua said happens when people watch such kind of movies. Strange.