'Raila has never pressured me to drop my senatorial bid,' Oburu Oginga says 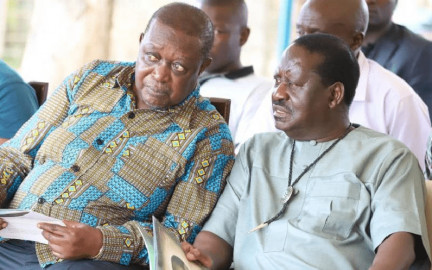 Dr. Oginga who is Mr. Odinga’s elder brother says that such rumours are only being peddled by political cowards who fear competing with him in the race for the seat.

He also refuted claims that he is only going for the race with hopes of getting favors from the ODM leader, saying that he is running for that seat as Dr. Oginga who is a Kenyan with a democratic right to vie for any seat and not because he is Mr. Odinga’s brother.

The EALA MP made the remarks in Alego/Usonga constituency where the area MP Samuel Atandi supported his bid, saying that Dr. Oburu is the best candidate for the Senate seat given his vast experience in political leadership.

Atandi laughed off claims that Dr. Oginga is now too old to continue running for elective positions, noting that the Senate is a place that requires those with wisdom, an attribute that Dr. Oburu has given his many years’ experience in political leadership.

Meanwhile, Siaya Governor Cornel Rasanga now says that Senator James Orengo is the best person to succeed him in the August 9 General Election.

Rasanga who was together with Oginga says that he is ready to hand over the mantle to Orengo, noting that currently, he is just holding a brief for the senator awaiting the official handing over after the polls.

The Governor who will be going home after completing his two terms at the same time endorsed Dr. Oginga’s bid to succeed Orengo in the Senate.