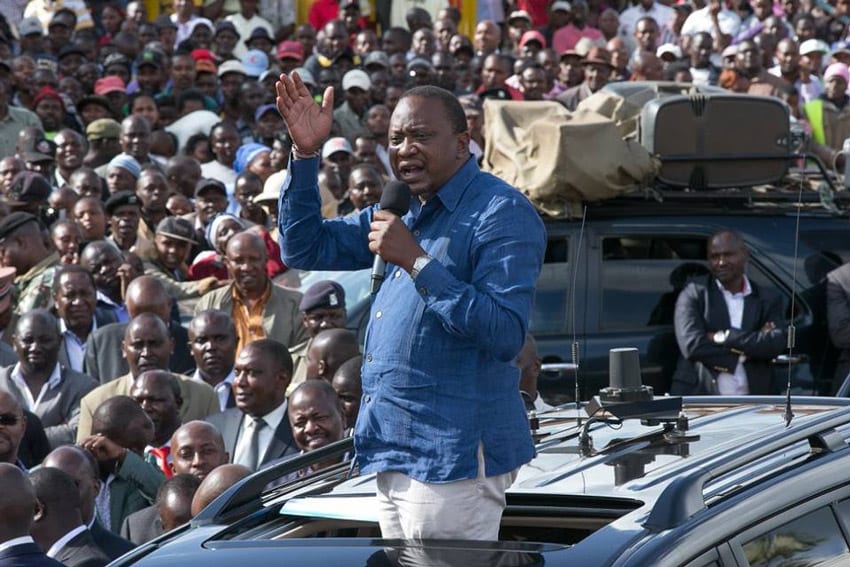 President Uhuru Kenyatta has accused the opposition Coalition for Reforms and Democracy (CORD) leader, Raila Odinga, of hoodwinking Kenyans on matters of corruption.

Speaking in Naro Moru in Nyeri County on Monday, November 28, President Kenyatta said that Raila’s recent relentless criticism of the government on the issue of corruption is a diversionary tactic aimed at derailing their development agenda.

He accused Raila of focusing on propaganda, and spreading political hate that is detrimental to the peace that is being enjoyed in the country.

“The problem in this country is bad politics. We are focusing on negative and divisive politics. Recently, when we allocated money to put up a referral hospital in Nanyuki to ease pressure for Nyeri Hospital, the same person said money had been stolen,” said President Kenyatta.

President Kenyatta said that despite the bleak picture that the opposition paints, the country’s economy has grown to 7 per cent adding that systems are being put in place to spur further growth.

Deputy President William Ruto, in his address, dismissed political propaganda against the government, saying Jubilee won’t be distracted from its agenda to serve the people of Kenya.

His pronouncement came hours after Raila launched a fresh onslaught against President Kenyatta, blaming him of tolerating corruption.

The CORD leader said that Jubilee government was selective in the crackdown on graft, saying most individuals who are closer to the presidency are being shielded from investigations by State House.

“The case of the NYS clearly demonstrates the manipulation and the game of favorites Jubilee is playing with corruption while accusing the opposition of doing nothing,” read Odinga’s statement in part.

“As the government claims to be finally cracking open the case, the silence on Ms Anne Waiguru, the former CS at the centre of this scam is loud.”

Waiguru has in several instances claimed innocence over the loss of Ksh 1.6 billion at the NYS saying she played a big part in unraveling the scandal and stopping further theft in the ministry.