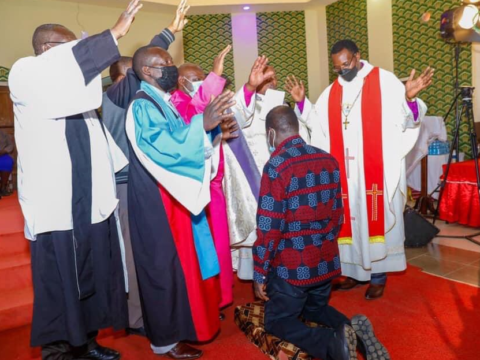 A section of Central Kenya leaders have vowed to intensify their campaigns for Orange Democratic Movement (ODM) leader Raila Odinga in the region amid talks from critics that he is a hard sell.

Speaking during a church service at the Bible Fellowship Church in Kigumo Constituency, Murang’a County on Sunday, the leaders lauded Mr. Odinga for the sacrifices he has made for the sake of democracy saying the handshake calmed political temperatures that were rising to dangerous levels.

Mr. Odinga, during the service, took time to woo the congregants saying the Building Bridges Initiative (BBI) had proposals that ensured Central Kenya got their fair share of the national cake.

With barely a year to the next general election, Mr. Odinga was making yet another visit to Mt. Kenya on the backdrop of reports that leaders allied to the president had lamented that popularising him in the region was proving to be a herculean task.

“Kamanda na Kioni, don’t cheat him that the ground is okay. If we were to go and cast votes today, those people who have shown you all the madharaus including the president ndio watachukua kura,” said Dr. SK Macharia – Chairman, Royal Media Services.

“Nine years of being told a lie is very easy for people to think it’s the truth. For us to get our people from that lie to where the truth is, it will take a while, we need to do it slowly in the time that we have,” said Jeremiah Kioni – MP, Ndaragwa.

The ODM leader, who is yet to formally declare his bid for the presidency, sought to allay the fears, saying he means well for the region.

The former Prime Minister recalled his journey with President Uhuru Kenyatta that gave birth to the BBI.

And amid the growing rift between President Kenyatta and his deputy William Ruto, the leaders warned that the region stood to lose if they made the wrong choice next year.

“There are projects that have been started by the president today, as we vuka hii mto if they are not finished, we want a person who is going to ensure that they’re finished. If you’re already fighting with him, how can we entrust those projects with you,” said Kioni.