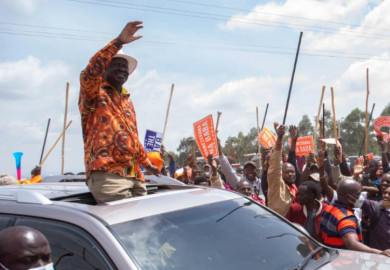 Odinga, while speaking at Ololulunga in Narok County on Saturday, highlighted the troubles which have long put the residents at logger-heads with the government including grabbed land, deforestation and misappropriation of rates incurred from the Maasai Mara National Park.

The former premier, while recounting the historical struggle of the Maa community for their land, urged residents to acknowledge the efforts of their past leaders, citing the likes of the late William Ole Ntimama.

He acknowledged the late Ole Ntimama’s efforts in the fight against land grabbers and deforestation of the Mau Forest.

Odinga addressed farming challenges affecting pastoralists and farmers in the region pointing out increased fertilizer prices, low costs of animal products such as milk and encroachment of the land used for pastures.

At the same time, Odinga sold his ten-point agenda under his Azimio la Umoja umbrella which he said was the solution to pre-colonial challenges affecting the country.

In reference to the social protection fund, Odinga revealed that insufficient water, pastures and adverse climatic conditions which serve as a key cause of poverty would be addressed by his program of the Ksh.6,000 monthly stipend to ensure no family lacks basic needs.

He assured that he would have a sit down with the aspirants to settle on just one who would carry the flag and represent the interests of all.