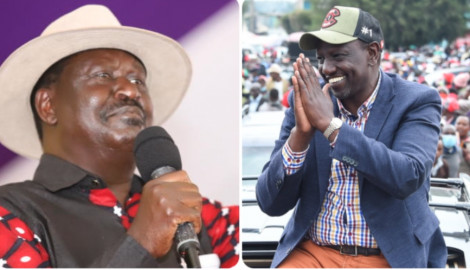 ODM leader Raila Odinga who is drumming up support for his Azimio la Umoja clarion call will be receiving defectors from the Amani National Congress (ANC) at the Orange House.

At the same time, Deputy President William Ruto will tour Kiambu on Thursday as he popularizes his 2022 presidential bid.

His packed day begins with a stopover in Gichagi, Uthiru, at around 10am, after which, he will head to Kinoo where he is expected to among other things, commision the Mama Ngina and HGM Schools as well as the Kinoo shopping centre.

At around noon, the second in command will be  in Zambezi, Kikuyu before leaving for Kiambaa, with a stop-over at the Muguga Market.

He will thereafter wind-up his day with several stop overs in Limuru (Kabuku and Ngecha),  as well as Kabete (Wangigi and Kikuyu Town).