Raila to be sworn in as President of Kenya, says NASA 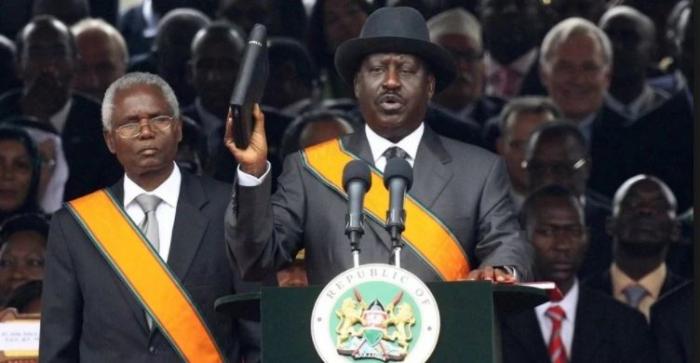 The National Super Alliance has clarified that its leader Raila Odinga will be sworn in as the president of the Republic of Kenya and not as the People’s President.

NASA CEO Norman Magaya on Monday morning said the controversial ‘inaguration’ ceremony will be held at Uhuru Park grounds despite police warning that no group will be allowed in the venue tomorrow.

Magaya insisted the swearing in will be done in accordance with the Assumption of Office of the President Act as well as the oaths set out in the Constitution.

“As stated before, we have a qualified judge who will undertake this process. We expect it to run smoothly,” said Magaya.

The NASA CEO accused Nairobi Police boss Japheth Koome of being partisan in declaring Uhuru Park a no-go zone on Tuesday, January 30 when the NASA ‘swearing in’ is set to take place.

He further termed as dishonest the announcement by the Nairobi County Government that Uhuru Park had been closed down until further notice to undergo renovations.

“We are the only ones who have legitimately made an application to use Uhuru Park. We have not seen any notice to tender for the said renovations… It was an after thought that was made after we made our application. People are engaging in a lot of dishonesty,” he added.

According to Magaya, NASA leaders intend to hold a peaceful ceremony that will last for three to five hours.

On Sunday, the Nairobi Police Commander said the NASA opposition coalition had not formally notified him on the plans to hold the controversial oathing in Nairobi.

“I’m reading on the press that so and so will be at Uhuru Park, which I’m not likely to allow because if I allow there will be a confrontation and people will be injured. You have heard several groups want to use Uhuru Park on the same day. Tell them we love this city and we will guard it jealously. We will not allow breach of peace,” said Koome.

“Nobody will be at Uhuru Park because I must protect everybody. If I allow people to go there and they injure one another I will have slept on the job,” said Koome.